My music
Bel Canto – The Voice of the Viola
July 1st, 2017
Tags: Vieuxtemps 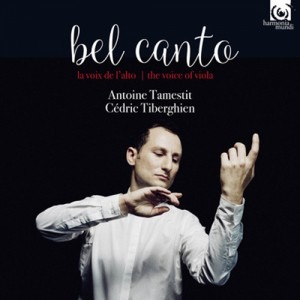 Here the diva is the viola!
How did the viola move from the status of ‘dramatic contralto among instrumental voices’ (to quote the critic Henri Blanchard) to ‘a character of nobility and languor’, according to Georg Kastner’s treatise on instrumentation (1837)? Going well beyond mere historical interest, this album answers the question by unveiling the charms of a repertory that delighted Parisian concert halls and salons throughout the 19th century. It tells the story of an instrument that at last emerged from the violin’s shadow thanks to immense virtuosos; and now the talent of two great musicians of our time brings back to life these pieces which offer much more than the exquisite languors of bel canto. The diva is the viola; its servant is named Antoine Tamestit.