Artists Behind the scenes
Behind the Scenes at Aldeburgh with the Britten-Pears Young Artist Programme
by Oliver Pashley July 7th, 2014 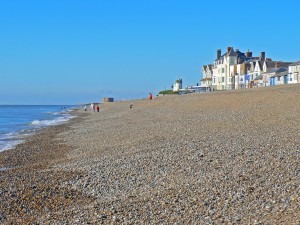 Many think of big festivals in the UK as happening in the bigger cities – London, Cambridge, Huddersfield… But tucked away in the not-too-far reaches of Suffolk lies the quiet town of Aldeburgh, home to one of the most formidable festivals this country has to offer, a festival of which I was about to be a part. I was about to spend three weeks with the Britten-Pears Young Artist Programme working on Owen Wingrave, Britten’s penultimate opera, originally written for television. We were performing a reduced orchestration for 16 players, and then touring to Edinburgh in August as part of the Edinburgh International Festival. This was the first time this piece had ever been performed at the Aldeburgh Festival, in addition to this being the very first event of the Festival this year… no pressure then. 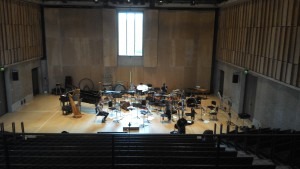 Both Aldeburgh and the nearby Snape Maltings have strong connections with Britten; he was born just down the road in the village of Lowestoft and moved to Aldeburgh in 1947, where he founded the Festival. Britten was buried in the local churchyard in Aldeburgh, testament to his roots here.

The rocky beach, with the bracing wind and expansive views of the North Sea, forms an ideal backdrop to this idyllic town in the east of England where we were about to spend three weeks – and so off I trotted to get a dose of sun (well, sort of), sea, and sand (well, pebbles), in addition to a good dollop of Britten, and decided to blog about the most exciting bits along the way… 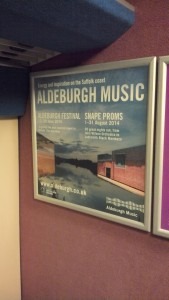 Greetings from day one of the Britten-Pears Young Artist Programme! Looking forward to getting to know this bunch of incredible (and mostly still jetlagged) musicians from all over the world.

The sea air definitely has a relaxing effect – well, it could also be knowing you’re only 100 meters from the nearest pub, but I’m pretty sure it’s the sea air… We’ve settled into rehearsals now, and enjoying using the wonderful Britten Studio at Snape Maltings for our tuttis. Apparently this is the first time the concert hall pit will have been used in quite a few years – better start dusting off the cobwebs then… 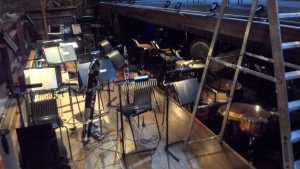 Brief recording for BBC Radio 3, and then a dash to the train station to get back to London – I’m temporarily leaving the tranquil coast behind and diving back into the city for a gig with The Hermes Experiment.

5.30am and on the bus back to the station to make it back to Aldeburgh for the 10 o’clock call! Spotted this on the train – we’re famous! 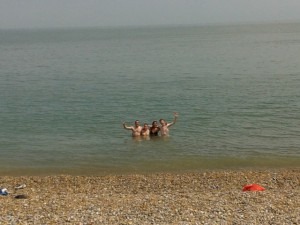 It’s now a reasonable time of day, and I’m fully recovered from the coffee-induced daze of such an early start. Currently in the process of moving into the pit… mind that stepladder!

Just had our final dress rehearsal – looking and sounding great (we hope!) Got a day off now (to dash back to London to teach), then we open on Friday 13th… hope no-one’s superstitious! 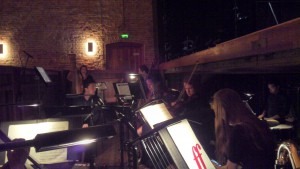 What better way to prepare for the first show than a quick dip in the North Sea…that sea air is pretty bracing!

All ready to go! 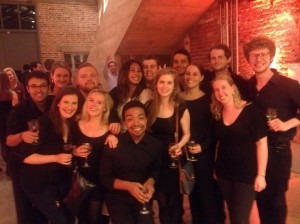 A full house, and a great show! Now for the swanky drinks reception…

A day off after our third show – and what better way to spend it than to sightread the Schubert Octet in a kitchen? 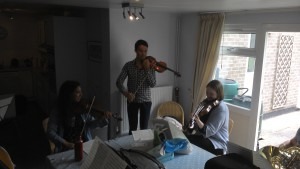 Our final show done – what an amazing few weeks! Sad to leave the Land of No Mobile Phone Reception, but we have Edinburgh to look forward to. Thanks to everyone for such a memorable time, and here’s to the tour!