Composers Inspiration
Beethoven at the Ballet
by Maureen Buja May 28th, 2016
Tags: Beethoven 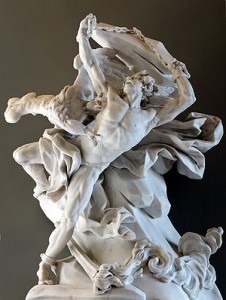 Prometheus depicted in a sculpture by Nicolas-Sébastien Adam, 1762 (Louvre)

We don’t often think of Beethoven as a composer for the ballet – as an original composer, that is, rather than having his music used in later times for ballet. In 1801, however, Salvatore Viganò (1769-1821) came to Vienna and asked Beethoven for music.

Viganò came from Naples and had studied music with his uncle, Luigi Boccherini, but gave up composition to become a dancer, first appearing in Venice in 1788. He is the inventor of the ‘coreodramma,’ a joining of dance and pantomime. The subjects were usually based on historical or mythological themes and Shakespearean dramas.

The ballet, Die Geschöpfe des Prometheus (The Creatures of Prometheus), is based on the allegorical story of Prometheus. This Titan from Greek mythology is best known as the god who stole fire and brought it to humanity. For Viganò, this story was too tame so Prometheus is made more of a philosophical god who brings manners, customs and moral to the people, driving out ignorance. The personification of these ideas is realized in two statues who come to life, and who, through harmony, are made into passionate, sensitive beings. Prometheus brings them to Mount Parnassus and each of the gods instructs them in music, in tragedy and comedy, and in dance. The original scenario for Viganò’s work is lost but Beethoven did write some notes into his sketchbooks so we have some idea of the story.

The Ballet opens with an Overture, setting the scene: ‘Pursued by the mighty wrath of Heaven, Prometheus enters, running through the forest towards his two clay figures, to whose heart he applies the celestial fire.’

Beethoven: The Creatures of Prometheus, Op. 43: Overture (Melbourne Symphony Orchestra; Michael Halasz, cond.)
Following the Overture is an Introduction, in the form of a storm. Listen to this and think about a later storm created by Beethoven as part of the Pastoral Symphony. It’s just a brief section, but full of potential for his future.

Beethoven: The Creatures of Prometheus, Op. 43: Introduction (Melbourne Symphony Orchestra; Michael Halasz, cond.)
Beethoven; Symphony No. 6 in F Major, Op. 68, “Pastoral”: IV. Thunderstorm (Orchestra of the 18th Century; Frans Brüggen, – Conductor)
Prometheus brings his animated statues to Zeus and the gods grant them various attributes. One of the best sections is the Adagio, where they receive music: Euterpe, one of the nine Muses, begins, signalled by the flute; Amphion, one of the legendary musicians of the ancient world, plays his lyre (in the unique use of harp in Beethoven’s music); Arion (bassoon) and Orpheus (clarinet), two more legendary musicians, add their music before Apollo comes in on cello. The whole movement is a marvel of texture and timbre as the voices come together to personify music to the two statues.

Beethoven: The Creatures of Prometheus, Op. 43: No. 5: Adagio (Melbourne Symphony Orchestra; Michael Halasz, cond.)
The statues learn about war and death and the music takes us through the Turkish style and a Bacchanalian dance and a Germany country dance before the Finale, which, as one commentator noted, is in E flat major, ‘the proud key of a new age.’

Beethoven: The Creatures of Prometheus, Op. 43: No. 16: Finale (Melbourne Symphony Orchestra; Michael Halasz, cond.)
The work is rarely performed today but stands as a monument to Beethoven’s happy middle-period music, written between 1800 and 1815. A contemporary reviewer of the performance in 1801 thought that the music was too learned and too large-scale for a ballet. Beethoven put the blame on its lack of success on the choreography, but the work did receive 23 performances in its first two years.