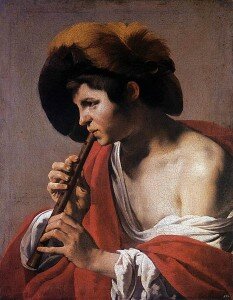 In the mid-1980s one of my music teachers was the composer and recorder player Ian Shanahan. I once asked him why he loved and played the recorder? His reply still rings true today. “No one ever told me that the recorder wasn’t a musical instrument”.

I have been a ‘player’, I use that word lightly, for a few years. I was immediately hooked on the velvety, luxurious sound that can be produced if you try. The diversity of the music that a recorder makes is endless. It can create Multiphonics, and can play the lowest note to the highest. When you overblow the sound possibilities grow exponentially. Then there’s flutter-tonguing, harmonics, syllabic articulations, the list goes on. And you can create reasonably dynamic (volume) variations if you try.

I see a lot of recorder players who do not like or pay much attention to dynamic markings; I wish they would. What a practiced recorder player can do with volume changes can make a large difference to the overall quality of a piece.

We can’t all be professional players, but we can aspire to a better sound, and we know how to do that, practice. It took me eight years before I considered I could play the piano well enough for others to hear, without them or me cringing. Now I’m a master, of my own music that is.

JS Bach has many masterworks that are written and adapted for the recorder. Bach’s Triószonáta BWV 1039 expresses beautifully that fine mellow sound that the recorder creates. Bach’s Andante and Allegro from sonata in E minor, BVW 1034, again this piece lets you hear how clear and placid the recorder is, especially when accompanied by the harpsichord and cello.

This arrangement of Gagliarda Seconda detta La Scabrosetta by the Italian composer Giovanni Maria Trabaci (c1575-1647), shows a range of renaissance recorders from the small to the very large, but not all of them.

The Australian recorder player and musical director Genevieve Lacey is known the world over and has commissioned many pieces for the recorder to help build its repertoire. Genevieve Lacey is seen here playing Telemann’s Fantasia No. 1 live from the Melbourne Recital Centre. You can hear her mastery of this instrument; and playing without sheet music a composition by perhaps the greatest composer of all recorder music Georg Philipp Telemann.

The first recorders were made in the 1500s. It is part of the whistle family, and for many musicians and school students, it is their first musical instrument. For some, it stays with them throughout their lives, and for others it’s a transition tool to a variety of different instruments.

The pure clear sound of the recorder speaks the history of western music. While still popular today, the recorder fills the annals of musical history.

There are thousands of paintings that have recorder players in them, because it was a popular instrument that travelled well. The Dutch painter Hendrick ter Brugghen (1588-1629) in his Boy Playing a Recorder has captured a fine example of a young recorder player in the early 1600s, which could be any young boy today.

One of the most famous rock-and-roll songs ever, has a recorder in it at the beginning after the acoustic guitar intro. On Stairway to Heaven, the recorder was played by John Paul Jones who was the bassist and keyboardist in Led Zeppelin.

When you are hooked on the recorder, you are addicted for life. Apart from the practicalities of the instrument and its diverse range of pitches and tones, the exquisite sound that can be realised from a recorder, with practice, can move millions of people.

My wish is that more composers would write music for the recorder, and that more recorder music is played on the radio and in our concert halls.