Blog
Snuggling at the Piano
by Maureen Buja January 29th, 2015 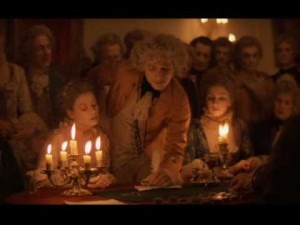 I was at a concert the other evening where the opening work was Schubert’s Fantasia for Piano 4-hands. Two pianists, sitting side by side, at one piano performed one of Schubert’s greatest pieces. The two pianists angled their benches carefully away from each other and then, gasp, kept bumping – elbows.

A friend asked later what was the point of it – why have such a mess of arms at the piano when it would have been so much simpler with 2 pianos. Ah, but then the whole point of writing music for people in such close proximity would have been missed – it’s all about the opportunity to sit, in public, close to someone of the opposite sex and all for the reason of music.

Compare, for example, this work by W.F.E. Bach for 1 piano six hands as performed by 3 women

and now when performed by a man and two women (starting at 02:11)

Garrick Ohlsson’s height compared with that of the small Alicia de Larrocha’s gives you some idea of the possibilities. What a difference an arm’s reach can make!

Social interaction, particularly under the eye of a watchful guardian, could be difficult in the 18th and 19th century. Hence all the opportunities people took to get close: let’s read together – even with the help of a candle, it provided a chance to get even closer.

And then, if you were in the parlour, some duets perhaps with flute and piano would be in order. This provided ample time for secret conversations as you discussed the music, the chance to look deep into his eyes as you started the piece together and confirmed each other’s readiness at cadences, and so forth.

Perhaps this is more about why music matters in social discourse, but we’d rather think of it as the effect of music making on the love life of our ancestors.

How many people can you fit at a piano?

And, although it’s advertised as a piece for 8 hands – there’s one hand free to turn to page or play pattycake!

With 5 players, 10 hands and 1 piano, everyone gets an octave

So, don’t think of that piano as a center for pianistic showmanship alone – think of it more as a social center for intimate discussions…of music, of course!