Events Reviews
Back to the roots
Naples puts on Rossini’s Mosè in Egitto 200 years after its house debut
by Philip Eisenbeiss April 6th, 2018
Tags: Rossini 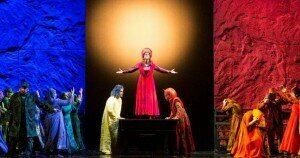 Quite possibly the Teatro San Carlo of Naples, Italy’s leading opera house in the early 19th century, has found its groove again. In spite of a middle-of-the-road production of Gioachino Rossini’s Mosè in Egitto (Moses in Egypt), the legendary San Carlo might – finally – be on to something. At the performance attended, the house was nearly completely full, with a healthy home-grown audience and a large contingent of foreign visitors. 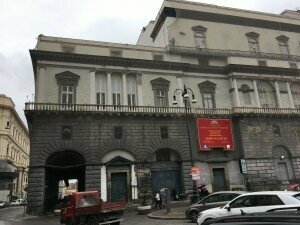 Nobody can claim that this rarely performed Rossini opera is an audience magnet. And yet, conversely, in this case it probably is. The San Carlo’s Artistic Director Paolo Pinamonti has committed to an unusual yet highly relevant program which celebrates the operas that the great composer wrote during his important Neapolitan years. This year is Mosè, 2019 will feature Ermione, and 2022 will bring us Ricciardo e Zoraide. All these works were premièred at the San Carlo about 200 years ago. Consequently, the theatre chose the original version of Mosè, rather than the 1827 revision Moise et Pharaon Rossini wrote for Paris.

In a well-coordinated effort, the Teatro San Carlo’s theatrical museum MEMUS featured an extraordinary exhibit on Rossini’s Neapolitan years, curated by and assembled from the collection of leading Rossini scholar Sergio Ragni, a Naples native. 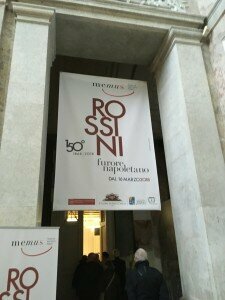 Put together, things suddenly start making sense. The San Carlo is reminding the world of the preeminent position it held two centuries ago. By presenting Rossini rarities and setting them in a historical context, this city’s proud theatre is claiming back some of its glory. And seeing the audience respond is a huge pleasure.

In terms of production, the Neapolitans didn’t aim quite so high. They revived a 2014 production from Welsh National Opera by director David Pountney and set designer Raimund Bauer. The first ten minutes were completely in the dark (the plague of darkness that Moses brings on the Egyptians after their Pharaoh refuses to let the Israelites leave), to the point that the conductor needed to work with two illuminated batons, veritable small light sabres. Once lit up, the set consisted of two large panels with sand-like structure, one blue and one red. The panels were moved around unimaginatively. None of the plagues were very fearsome and the parting of the sea was a stylized bore. The stage direction was uninspired at best. 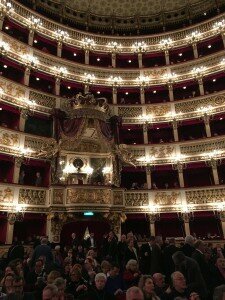 But Rossini’s opere serie are all about the music; and some of the singing was remarkable. Enea Scala delivered a formidable Osiride, son of the Pharaoh, in the finest bel canto tenor tradition. A powerful, highly modulated and flexible voice, the Italian tackled the complicated coloraturas and fast rising top notes with bravura. In the many enchanting duets, and notably in the second act quartet “Mi manca la voce”, the tenor blended subtly with the other strong protagonists. In the role of Elcia, the Israelite who has a secret romance with Osiride, Mexican soprano Karen Gardeazabal displayed a smooth, strong and sensuous voice, but also one of great agility. Ravishing and regrettably short her first act duet with Lucia Cirillo as her confidante Amenofi. Bel canto specialist Alex Esposito portrayed the recalcitrant Pharaoh, showcasing his flexible baritone and very long breath. Arianna Vendittelli was a warm, confident Amaltea, the Pharaoh’s wife. Goran Juric’s Moses was less memorable, as was the unfortunately underpowered chorus which would have benefitted from additional members, especially for the third act climax of the prayer of the Hebrews, “Dal tuo stellato soglio”. 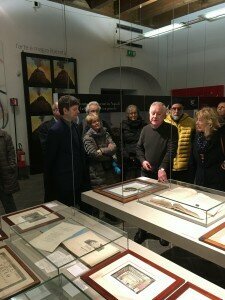 Conductor Stefano Montanari brought some pop-star allure to the reliable Orchestra of the Teatro San Carlo, with his enthusiastic leadership, tight leather pants and prominent earring.

It can only be hoped that the Teatro San Carlo and the city of Naples work closely together to widely promote the city’s unique heritage in Italian opera. These Rossini rarities provide a perfect focal point.