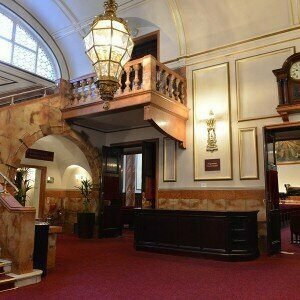 The foyer at the Wigmore Hall

One of the secondary pleasures of going to live music in concert is “audience watching”. Different artists and repertoire attract different audiences, and I love observing audience behaviour before, during and after a concert. The ritual of concert going and the habits of audiences have fascinated and intrigued me since I was a young child when my parents took me to the Proms and concerts at Birmingham Town Hall (where the City of Birmingham Symphony Orchestra was based before Symphony Hall was built).

Every concert has its own set of rituals and customs, but there are some common themes to all concerts as far as the audience is concerned. There is the arrival at the venue – on foot, by taxi or public transport. Then there is the collection of the tickets, at the box office or, in the case of London’s Wigmore Hall, a little table in the foyer. One might then purchase a programme and take it downstairs to peruse in the bar, with a chilled glass of something, before the concert begins. Meanwhile, others are congregating in the vestibule, checking coats into the cloakroom, ordering interval drinks and meeting friends, largely unaware of any rising tension backstage.

There’s a special atmosphere in the final moments before a concert begins as people enter the auditorium and ease into the plush seats, check phones a final time before switching off, chat quietly to one’s neighbour, a kerfuffle at the back of the hall as the stragglers are admitted. And then the house lights dim and that special experience of live music begins…..

Franck: Violin Sonata in A Major, M. 8 (arr. for cello and piano) / Du Pré & Barenboim
I love the very palpable sense of “collective listening”, that curious vibration in the concert hall when everyone is listening very intently, or when the musician/s creates a particularly intense connection via their performance and the sheer power of the music. It signifies a really remarkable, almost inexplicable communication, something often too complex to explain beyond the lame phrase: “You had to be there”.

At the end of a particularly concentrated performance, one senses the audience uncurling and flexing, like an animal stretching, before exhaling a collective breath and applauding.

The little rituals and habits continue after the concert too. Some people hurry to the green room to greet and congratulate the artist, or queue to have CDs signed. Others linger in the vestibule, chatting with friends or bidding concert companions farewell for the night. Some dash for a cab or the late bus. But each of us carries something special and personal away from the concert – our own particular memory of the music.