Blog
The Opera Scene in China
by Rudolph Tang May 20th, 2018 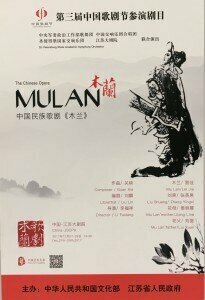 On a cold windy night of December 2017, I travelled from Shanghai to Nanjing on a secret mission. I was invited by an anonymous patron who would like me to pay a visit to the just inaugurated Jiangsu Centre for the Performing Arts (JSCPA，江蘇大劇院) and attend an opera performance. The programme of the night was Mulan, an opera in three acts composed by Guan Xia（關峽）, President of the China National Symphony Orchestra. Formerly known as Mulan Psalm（木蘭詩篇）, the opera was finished and premiered in 2004 with the title role created by Ms Peng Liyuan（彭麗媛）, a famed soprano, or better known now as the First Lady.

In early 2008, Peng made one of her final stage appearances in Mulan Psalm at the National Centre for the Performing Arts (NCPA) in Beijing. As the translator of its English libretto, I was invited to a post-performance reception held at the banquet hall on the top floor, overlooking the majestically lit Tiananmen Square and the Chang’an Avenue. We were told to submit our mobile phones and get prepared to shake hands with Her Highness. It was a once-in-a-lifetime experience. One month later her husband Xi Jinping became the President of China and I never got a chance to meet her again. 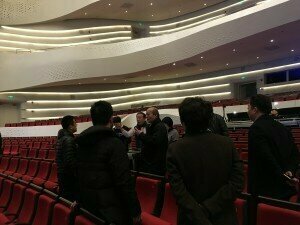 After Peng’s retirement, her loyal student Lei Jia（雷佳）became the second generation of Mulan. It was a very Chinese way to officially endorse singers for a leading role handed over by a singer who created the sacred role in operas that are untouchable by others: White Haired Girl（白毛女）, Sister Jiang（江姐）, and now Mulan to name but a few. In a set of unwritten rules, only officially endorsed singers are expected to sing the title roles and everything in the production shall remain unchanged. In those extreme cases, operas are best illustrated as museum pieces, much revered with its legacy and well guarded by its watchful ideological cadres.

The trip to Nanjing was a pilgrimage then.

That’s why it took over a dozen years before the opera, always performed in a semi-staged version, to get its full production produced by JSCPA under the baton of Leif Segerstam. Sung by soprano Lei Jia and tenor Zhang Yingxi（張英席）, the opera was christened Mulan（木蘭） from Mulan Psalm: It was an all too important occasion not to be missed.

But Mulan was not alone. It was one of the over 20 opera numbers staged at JSCAP in the sheer period of one month as part of the programme of the Third China Opera Festival. A triennial event first taking place in 2011, COF is presented by the Ministry of Culture and epitomises China’s ultimate ambition for its soft power, especially on art legacy favoured personally by its highest patron. According to fellow critic Chen Zhiyin, China turns out some 20 operas commissioned by opera companies, municipalities, powerful oligarchs, and ministries every year. All traces lead to heavy government spending, which often end up in a carefully monitored success. Then most of them will be shelved and never to be performed again. 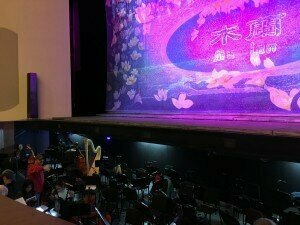 A scene of Mulan at JSPAC

But it was widely regarded as an inevitable journey to reach the opera’s Pantheon. “How does one know we are not Beethoven had we been not given the chances to write and be performed?” was the answer from an influential composer living and teaching at the Shanghai Conservatory of Music, during a radio interview in Beijing when confronted by a call-in “why are composers still contributing given that there are so many contemporary music failures”.

And the opera canon by Chinese composers continues. It is fused by the rise in infrastructural construction where each province is building a new venue every year and each city is striving to be recognised as a City of Music by UNESCO’s Creative Cities Network, thus raising higher stakes for its leaders to get promoted.

Whether China’s dream in becoming an opera superpower will end up in an opera Bollywood is unknown and unpredictable. But an array of internationally recognised Chinese story-telling operas has received little or zero subsidy from the Chinese government: Puccini’s Turandot, Tan Dun’s Marco Polo (1996) and The First Emperor (2006), Zhou Long’s Madame White Snake (2010), Huang Ruo’s Dr. Sun Yat-Sen (2011), Christian Jost’s Red Lantern (2015), Bright Sheng’s Dream of the Red Chamber (2017), some of them never performed in China.

There is clearly a way for China to take on the world with its operas, one way or another.