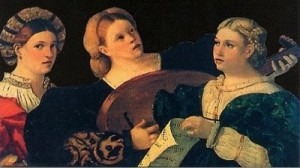 Claudio Monteverdi was a precocious musical talent who published his first collection of madrigals at age 15. Ambitious and highly confident he was hired as a singer and instrumentalist by Vincenzo Gonzaga, Duke of Mantua in 1590. Mantua and nearby Ferrara were highly important and influential artistic centers, and at various times during his stay in Mantua, Monteverdi was colleagues with the composers Giaches de Wert, Giovanni Gastoldi, Lodovico Viadana, and Salomone Rossi. In addition, the court also employed the poets Guarini, Rinuccini, and probably Tasso, as well as the painters Pieter Pourbus and Peter Paul Rubens. While his colleagues were illustrious and towering figures in the Italian arts scene, Monteverdi started his career not as a composer but as a poorly paid viol player. He was under the supervision of Giacomo Cattaneo, a string player at the court, who also provided the young Monteverdi with lodgings at his home. And that’s how Claudio came in contact with Cattaneo’s 15-year old daughter Claudia!

Claudia was a court singer, and eventually a member of Duke Vincenzo Gonzaga’s own “concerto delle donne.” Such groupings of professional female singers renowned for their technical and artistic virtuosity had originated at the court of Alfonso II, Duke of Ferrara but it was soon imitated around Italy. It revolutionized the role of women in professional music and is widely seen as the “most important event in secular Italian music in the late sixteenth century.” However, the reason Claudio married Claudia in 1599 had little to do with her beautiful voice. Monteverdi found his working life shaped by his stay at the Cattaneo household. Throughout his apprenticeship he made a number of important professional contacts, and although he continued to issue additional books of madrigals, his career seemed to go nowhere. His fortunes somewhat improved when Signore Cattaneo arranged for Claudio to marry his daughter. In essence, Cattaneo was simply looking for Monteverdi to take over his music business at the court, and to provide for his own retirement.

On 20 May 1599, wedding bells announced the union between Claudio and Claudia. Their honeymoon was rather brief, however, as Duke Gonzaga decided to depart for an extended spa holiday, and he took Monteverdi with him. Claudia stayed with Monteverdi’s father in Cremona, and the composer traveled through Austria, Switzerland, and Lorraine for almost 6 months. By 1601, Monteverdi had finally been promoted to “maestro della musica,” and Claudia bore him his first son Baldassare, who would later become a singer at St. Mark’s in Venice. A daughter Leonora was born in 1603 but died in infancy. Their second son Massimiliano was baptized in 1604 and became a practicing physician in Mantua. Monteverdi’s professional responsibilities now extended over the entire musical activity of the court, and his wife most likely performed much of her husband’s vocal music. In fact, she very likely took part in the original performance of L’Orfeo in February 1607. Claudia also provided vocal instructions to other court singers, including Caterina Martinelli who lived for several years at the Monteverdi house. However, by the summer of 1607 Claudia had fallen gravely ill, and was taken to her father-in law at Cremona for convalescence. Despite the best medical treatment of the day at hand, she passed away on 10 September 1607 and was buried in S. Nazaro. Monteverdi was devastated and lamented “the loss of a woman so rare and gifted with such virtue.” Emotionally, Monteverdi never recovered and entered priesthood in 1632.