‘Serve the Music With Your Technique’

Hong Kong-born violist Andrew Ling didn’t reach the viola until relatively late in his musical life. He started the piano aged four, and then the violin aged six. After high school, he moved to Indiana to study the violin, and after a year-long changeover switched to the viola. He now holds the position of principal viola with the Hong Kong Philharmonic, a post he’s held since 2010, and is giving his first full solo viola recital in Hong Kong on 11 December, playing works including the Ligeti Solo Sonata and the Brahms Op.120 Sonata. He also recently started conducting, something which he is exploring alongside his solo career. 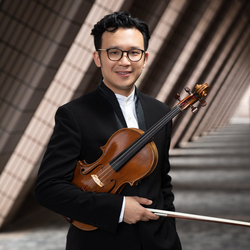 What made you switch to the viola?

Back in the day, about 20 years ago, I had a group of about six classmates and we would get together to play chamber music. We were all violinists – no violists. I think my sight-reading was a bit better than the others, so I was the only one who could have a go at sight-reading the alto clef. So, they gave me the viola part and I played it on the violin. In high school they knew I played viola parts so they then gave me a viola!

I remember the first piece I ever played on the viola was the Trout Quintet, when I was 13. I really enjoyed it, but I went on with the violin until my Masters, so I actually have my Masters in violin performance. I made the switch for a year to the viola, still studying at IU [Indiana], but after that went back to study another violin Masters with Cho-Liang ‘Jimmy’ Lin, a famous Taiwanese violinist. And then… I got the job as a violist!

I still give recitals on the violin, but I’m doing my recital in Hong Kong on the viola. It’ll be my first full recital on the viola since I came back to Hong Kong ten years ago.

Did you always want a principal job, rather than another position?

This [the HK Phil] is my first professional job. Before that, I’d done gig orchestras in the States when I was a student, playing concertmaster positions there, so I suppose I’m quite used to being in that seat. That doesn’t necessarily mean I have to be in charge all the time! I just think I can contribute more when I’m sat there, and I want to put my understanding of the music into the section, and hopefully make it sound better.

Do you play how you want in the principal seat? How much do you have to think of the section?

I always have to be listening to the cellos and the first violins – like playing in a string quartet, where you have to listen and react to everything. We have to provide the harmonic changes and support for the main tune, and that’s why I love this job so much. In the orchestra, when you play an inner part like the viola, you’re not as busy as the first violins. You have so much to listen for, and I learn so much more than when I was just playing the tune on the violin.

How did you get into conducting?

I never thought I would be a conductor in my life. When I got this job, after a few years I’d played almost all the major symphonies, and discovered such a rich repertoire. Then when Jaap [van Zweden, the current Music Director] arrived after two years, he brought his own sound with him, and the orchestra sounded a lot different. I thought that I wanted to try that, to see if I could make an orchestra sound good myself.

Being a conductor, you can suggest changes, and it’s a very different experience to just playing one line. I like playing solo, because it’s very direct, you can make the sound yourself in a very direct way, and with conducting, you can paint a picture with others. There are many more layers in the picture than when you just play solo.

What are the similarities for you, between playing and conducting?

Details of Andrew’s recital at City Hall can be found here.