When bass vocalist Alexei Tanovitsky visited Hong Kong to perform Wagner’s Die Walküre, he was heard coughing and choking onstage. Similarly, following his concert in Hong Kong, Tom Jones was forced to cancel the remainder of his Asian tour due to laryngitis. Not to mention all the performances I attended where an apologetic notice informed the audience that in order to “accommodate” the performing artists, the temperature of the performance hall had to be raised. And there are probably others—performing artists or otherwise—getting sick after visiting Hong Kong. So what is happening to Hong Kong, Asia’s self-branded world city? World city of what? 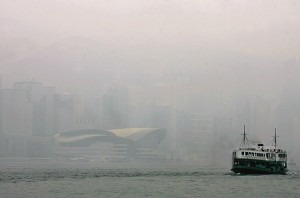 In Hong Kong, you need to bring a coat indoors.
Air conditioning is on full force even when it is only 10°C outside.
There is no way to adjust the temperature because all landlords compete to have their central air conditioning on full blast, since cool is apparently glam.

In Hong Kong, there are buses everywhere.
We might be considered lucky to have such a great public transportation system.
But most of the time, our buses are old and almost empty, and they create traffic jams and poison our air.

In Hong Kong, we have fine cuisine from all over the world.
This is also the place where you cannot order a simple glass of tap water.
No, our water is no worse than that in any other city, yet only bottled water is served and sold.

Why are the big corporations moving out of Hong Kong?
Why is air pollution not being recognised as a public health issue?
Why is there such an apparent lack of improvement when our almost consistently high API levels have been discussed for years in both local and foreign media?

As a city, Hong Kong indeed offers a certain quality of life, but unfortunately not quality health. What’s the point of being a wealthy world-class city when one of the most basic things in life—fresh air—is unavailable?
The so-called ‘fresh’ air we breathe is basically processed air from indoor air conditioners, which is a waste of electricity and energy.

I worry about the day when no artists will wish to perform here anymore. No more concerts and operas, no music, no arts, no culture; we will be left with only shopping malls where the young generation with its increasing allergy and breathing problems retreat for their leisure.

Hong Kong is vanishing in the pollution, drowning in the thick air. Perhaps the Ride of the Valkyries should be played as a lament for our city’s fading grandeur.

Because of greed, indifference and ignorance, Hong Kong is Asia’s city of waste.