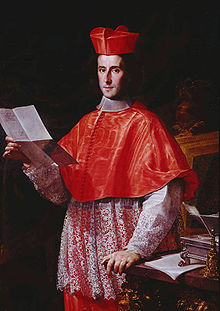 By all accounts, Cardinal Pietro Ottoboni — grandnephew of Pope Alexander VIII —loved “pomp, prodigality and sensual pleasure.” Apparently, portraits of his mistresses disguised as saints, including the angelic Margarita Pio Zeno of Savoy, decorated his bedroom. And he seems to have had lots of mistresses, as he sired between 60 and 70 children. For a man having taken an oath of celibacy, that’s rather a substantial number, don’t you think? But Cardinal Ottoboni was not merely chasing the pretty skirts of Europe; he was also surrounding himself with an extended circle of homosexual artists, among them Arcangelo Corelli.

Ottoboni lived in the Palazzo della Cancelleria (Palace of the Papal Chancellery) in Rome, and began to construct a theatre in 1689, which he eventually had substantially enlarged by Filippo Juvarra. The painters Sebastiano Conca, Sebastiano Ricci and Francesco Trevisani — undoubtedly very busy painting emblematic portraits of the Cardinal’s mistresses — resided at La Cancelleria, as did the radiantly beautiful Sicilian architect Giovanni Battista Vaccarini. Cardinal Ottoboni wrote his own cantata texts and librettos for oratorios and hired Alessandro Scarlatti, Antonio Vivaldi and Antonio Caldara to compose the music. When the pope decreed a ban of operatic performances in Rome, secret shows were given at Ottoboni’s Palazzo. Corelli joined the merry group of men in 1690, and soon became the star attraction at Monday night concerts. Joining him at these concerts were the violinist Matteo Fornari, the Spanish cellist G. B. Lulier, and the harpsichordist Bernardo Pasquini, alongside an orchestra of roughly ten to fifteen players. 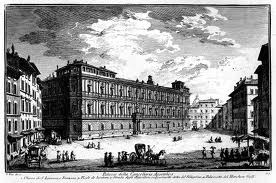 Corelli had first met Fornari in 1682, and they soon became an exclusive item. As Corelli subsequently wrote, “I was never far from Matteo’s side for nearly twenty years.” Socially protected and living discreetly amongst a circle of male friends, they devoted their time to the pursuit of music. Their intimate and long-term relationship became the inspiration for two compositions by Giuseppe Valentini, who dedicated his trio sonatas to both Corelli and Fornari. Corelli quietly developed his best-known and most influential works, the orchestral Concerti Grossi, and also became one of the most sought-after violin teachers; distinguished students included Gasparini, Geminiani, Castrucci and Locatelli. By 1708 Corelli withdrew from public view and began to revise his compositions. He died on 8 January 1713 a rich man with a fine art collection of 142 paintings. He left all his instruments and his music, and all future proceeds stemming from it, to Fornari who readied the unpublished Op. 6 Concertos for issue with Estienne Roger of Amsterdam. To protect his income, Fornari took out a papal privilege that prevented the import or reissue of the Op. 6 on the Roman market. This also prevented rival Bolognese publishers, who had previously issued works by Corelli, from getting their hands on the compositions. By special papal decree, Corelli was buried next to Raphael in the section of the Pantheon in Rome that holds the remains of painters and architects. Cardinal Ottoboni’s expenses had always exceeded his income — hardly surprising looking after 70 children and a bunch of artists — and his large estate and extensive musical library were liquidated to settle his debts.