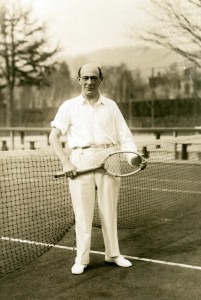 Their weekly tennis games had become somewhat of a tourist attraction. George was younger and more powerful, always ready to exploit the weaknesses of his opponent. His movements were smooth and nonchalant, with every step and hit designed to impress his adoring fans. Arnold, on the other hand, was significantly older. Although in reasonable physical condition, the strain of forced exile was clearly etched onto his face. He was a nervous but highly focused player. Trying to catch his opponent off guard, he produced choppy groundstrokes and continued to rush the net in a seemingly random matter. But there was nothing random about Arnold Schoenberg’s tennis game, nor was it unusual for George Gershwin to delight in showing off his estate—including tennis court—in Beverly Hills.

Although a seemingly unlikely pair, George Gershwin and Arnold Schoenberg were good friends. Schoenberg was teaching at UCLA, and Gershwin continued to compose a number of hit scores for Hollywood movies. Both had the highest admiration for each other’s art, with Schoenberg frequently and publically leaping to his friend’s defense. “Many musicians do not consider George Gershwin a serious composer. But they should understand that, serious or not, he is a composer – that is, a man who lives in music and expresses everything, serious or not, sound or superficial, by means of music, because it is his native language. Gershwin is an innovator, what he has done with rhythm, harmony and melody is not merely style. It is always that way with art, you get from a work about as much as you are able to give to it yourself.” 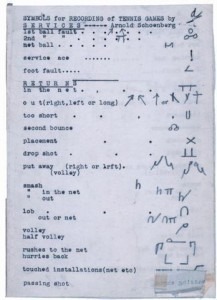 In this 1937 silent home movie, mostly shot by Gershwin himself, can be seen Arnold Schoenberg, and his wife Gertrud, Gertrud’s brother Rudi Kolisch (of the Kolisch string quartet) and Doris Vidor and a few brief glimpses of Gershwin himself. This film was taken on Gershwins tennis court at Roxbury Drive, Beverley Hills. Also included on this short video is a photograph of Gershwin at work on his famous oil painting portrait of Schoenberg.

For both composers, music was an all-consuming condition of being alive. Even when they played tennis, they thought about music. Schoenberg even invented a new system of musical notation, based on a transcription of the events in a tennis match. He was not concerned with the actual tennis score, but wanted to be able to record the moves of his tennis game. So he devised his own musical tennis shorthand that was capable of recording everything from a “player rushes to the net,” to “player touches installations like the net,” and “foot faults.” As far as we know, Schoenberg never translated his sporty new notational system into an actually musical score. Tragically, his weekly tennis games with George Gershwin came to an abrupt halt, as his friend and fellow composer died unexpectedly at age 38. Schoenberg was visibly shaken, and recorded a touching eulogy. “I do not speak here as a musical theorist, nor am I a critic, and hence I am not forced to say whether history will consider Gershwin a kind of Johann Strauss or Debussy, Offenbach or Brahms, Lehar or Puccini. But I do know that George Gershwin was an artist and a composer; he expressed musical ideas; and they were new – as is the way in which he expressed them.”