I wonder if you have ever seen the 1939 drama romance film titled Golden Boy? Directed by Rouben Mamoulian, it featured Barbara Stanwyck and the film debut of William Holden. In fact, it was the role in this movie that made Holden a superstar. Holden plays a highly talented and promising violinist who receives an invitation to become a prizefighting boxer. The character is torn between the lure of big money and the distinct possibility of injuring his hands and thereby destroying his musical career. He eventually decides on becoming a boxer, but a tragedy in the ring forces him to reassess his choice.

In real life, it is of course possible to have dual careers in sports and in the arts. In a previous article I introduced you to Micheline Ostermeyer, the true embodiment of the Olympic Spirit. Ostermeyer not only won 3 medals at the 1948 London Olympics, she also played the Brahms D-minor concerto, César Franck’s Symphonic Variations and Liszt’s E-flat concerto in a single evening concert! 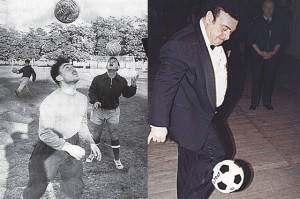 More often than not, however, multi-talented individuals are forced to make difficult decisions. Or conversely, fate is making the decision for them. For example, take the career of renowned Georgian tenor Zurab Sotkilava, who recently died of pancreatic cancer at the age of 80. Initially he was torn between his passion for singing and his love for football. At first football prevailed, and he became the captain of the youth national team of Georgia, which won the USSR championship. He joined Dinamo Tbilisi, one of the most prominent clubs in Soviet football, and was poised to start a promising international career. However, in a match against a Yugoslavian opponent Sotkilava sustained a severe injury that put an end to his sports career. As such Sotkilava dedicated his life to music and graduated from the Tbilisi Conservatory in 1965. He also attended classes at La Scale and made his Bolshoi debut as Don Jose in Carmen in 1973. He became a regular member of the Bolshoi Theatre, and made frequent guest appearances at the Teatro Communale in Bologna. Regarded as a Verdi specialist, Sotkilava was appointed to the Moscow conservatory and trained a long list of famous opera singers. He almost certainly would have made more money running after a ball, but it was his dedication to music that actually provided a service to humanity.