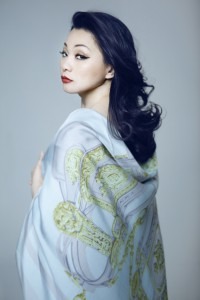 Ying Huang, renowned lyric coloratura soprano and opera singer, is one of the outstanding Chinese vocal artists who has been active worldwide in opera and concert performances, TV and movie productions as well as recording studios. Her tender and sweet voice, flexible and unassailable technique, authentic musical styles and impassioned stage performances have won accolades worldwide from colleagues, audiences and the media, who hail her as “the nightingale from China.”

Ying Huang is the first Chinese vocalist to perform a major operatic role in an opera movie. She first came to international attention at age 27, when she made a sensational debut as Cio-Cio San in Frédéric Mitterrand’s 1995 acclaimed feature film Madame Butterfly. Since then, she has appeared in opera houses including the Metropolitan Opera, Théâtre Royal de la Monnaie in Brussels Belgium, Royal Danish Opera, Cologne Opera House, China National Center of Performing Arts, performing major roles in, Le Nozze di Figaro, The Magic Flute, L’elisir d’amore, Rigoletto, Don Giovanni, Werther, Falstaff, Der Rosenkavalier, Semele, among others. On December 29, 2006, Ying Huang starred in The Magic Flute at the Metropolitan Opera, the first in the “Met HD Live” series, which was broadcasted live worldwide. A New York Times review praises her “bright tone” and “supple phrasing” and declares her “suited to Mozart.” Another reads: “A lovely, clear-voiced lyric soprano, Ying Huang, in her debut role at the Met, was an alluring Pamina.” In 2009, Ying Huang was selected onto the “Wall of Fame” in the Met’s 125th Anniversary celebration. Meanwhile, Ying Huang has devoted herself to the cause of Chinese contemporary operas. She worked with Tan Dun to prepare the opera The First Emperor, and has starred in his Peony Pavilion, which was later recorded by Sony, and Guo Wenjing’s The Poet Li Po, among others. In April, 2011, Madame White Snake, in which Ying Huang starred the title role in its premiere production, won the Pulitzer Prize.

As an artist for Sony Classical, Ying Huang has recorded a number of internationally distributed albums including the soundtrack of Madame Butterfly, Operatic Arias with James Conlon and the London Symphony Orchestra, Richard Danielpour’s Sonnets to Orpheus, and Bitter Love, a concise version of Peony Pavilion, composed and conducted by Tan Dun. Her most recent Sony release includes Roger Waters’ Ça Ira with Bryn Terfel and Paul Groves.

Dedicated to using her voice to bridge the East and the West, Ying Huang has been frequently invited to perform on celebration occasions, such as the ground-breaking 1997 Vienna White Christmas concert with Plácido Domingo and Michael Bolton, the Opening Concert of the Shanghai Grand Theatre with José Carreras, the pre-opening celebration of the Athens Olympics in 2004, the Celebration Concert marking the success of Shanghai’s bidding to hold the World Expo with Andrea Bocelli, the Opening Ceremony of the 2010 Shanghai World Expo (singing the theme Song Ode to the Expo) and the Closing Ceremony of 2011 World Aquatics Championships. After her performance on September 21, 2011 in the Kennedy Center’s “China: The Art of a Nation” festival, the Washington Post reviews: “It was soprano Ying Huang’s riveting and lustrously sung performance of two gorgeously neo-impressionistic arias from Zhou Long’s 2009 opera, “Madame White Snake,” that was the highlight of the evening.

Ying Huang will be performing in Hong Kong for the Hong Kong International Chamber Music Festival with the concert “Paris and Shanghai” on 18th January, 2012 sponsored by Interlude.