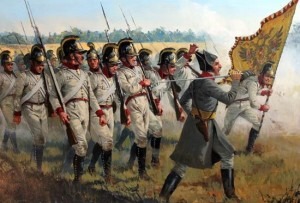 Austrian Army in the Napoleonic Wars

Haydn’s Mass No. 10 has a nickname that’s understandable, the Paukenmesse (Timpani Mass) due to its use of the timpani. It also has a name written by Haydn into the manuscript, ‘Missa in tempore belli,’ i.e., Mass in Time of War.

Haydn wrote the mass in August 1796. At the time, Austria was at war with France and after four years of battles, had remained largely unsuccessful. As France advanced victoriously, the old Holy Roman Empire was in tatters. As Haydn was writing his mass, Austria was under a general mobilization, and the mood in the country was very unsettled.

This is reflected in the music. The Benedictus and Agnus Dei sections have references of battle in them, the Agnus Dei with its threatening timpani motifs (hence the Paukenmesse title) and harsh trumpet fanfares being of particular note.

But then, as a contrast, the Kyrie, which has sometimes been thought of as a ‘trivial’ in relation to the rest of the mass and its subject, is, at the same time a necessary uplift to a grim time. The opening has an immediate feel of darkness, despite it being in the key of C major. The first clue we have of some light is the obbligato oboe that rises above the chorus. The first soprano solo also changes that opening character. 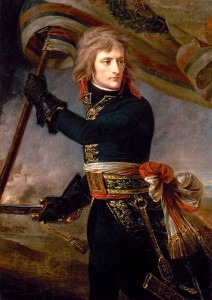 The Young Napoleon in 1801 by Antoine-Jean Gros

It is when we get to the end of the mass with the Benedictus (skipping over the Gloria, Credo, and Sanctus), that the darkness returns. The kettle drums have their position in the introduction. The soprano begins alone but instead of joining in, the other three solo voices merely add embellishments to her line. The use of solo voices in what is normally a choral section adds to the solemnity. The constantly falling lines, the running bass lines in the strings, and the accents added by the timpani call to mind earlier music such as the lament, built around similar falling lines.

Haydn: Mass No. 10 in C Major, Hob.XXII:9, “Missa in tempore belli”: Benedictus
It is in the final sections, the Agnus Dei and its Dona Nobis Pacem, that the seriousness comes to the fore. The solemn homophonic opening with all voices, the quiet extended emphasis on the word ‘miserere’ with drums and trumpet in the orchestra and then the growing dynamics and the increasing urgency of the trumpets and drums give this section a wholly urgent meaning.

Haydn: Mass No. 10 in C Major, Hob.XXII:9, “Missa in tempore belli”: Agnus Dei
The triumphal final section, Dona Nobis Pacem, ‘Grant us Peace’, gives us the real goal of the piece. Peace, and with its victory, is to be sought by all combatants.

Haydn: Mass No. 10 in C Major, Hob.XXII:9, “Missa in tempore belli”: Agnus Dei: Dona Nobis Pacem
Despite the dark times and the dark subject, we are left, in the end, with a firm sense of optimism about Austria and her place in the world or the world of war.