Artists Behind the scenes
Tours of Duty – Musically Speaking
by Janet Horvath May 3rd, 2014 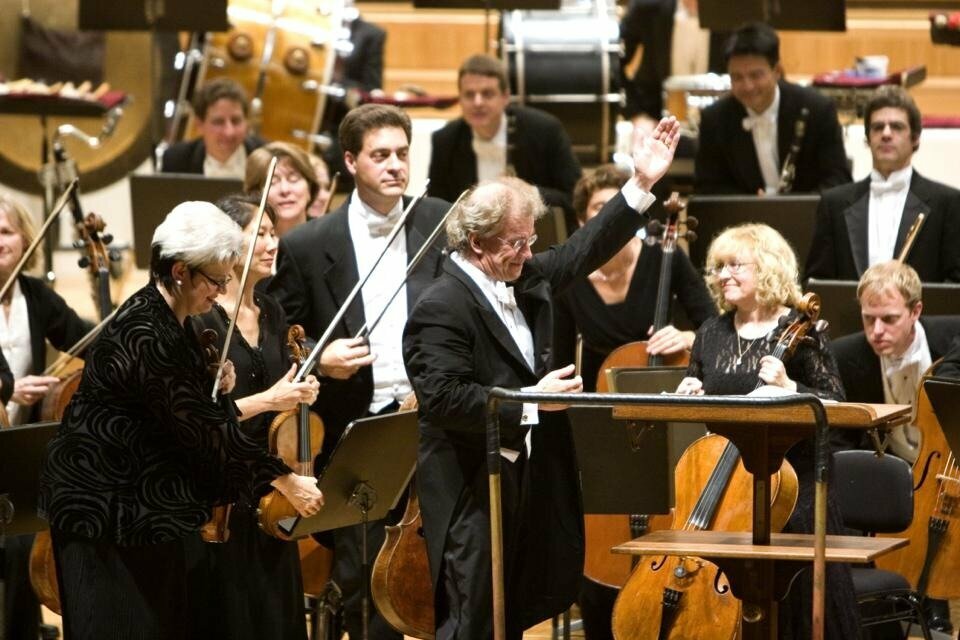 Orchestra “Tours of Duty” to venues across the globe results in memorable concerts and quirky tales.

I remember a Florida tour in February — who wouldn’t be pleased about that? First we performed in Carnegie Hall, in New York. After the performance we moved quickly to pack up our instrument and wardrobe trunks, change into civilian garb and board buses waiting for us to take us to the airport. (During the years when we traveled after concerts.) There had been little time before the concert to grab a bite so many of us were starving when we boarded the airplane well after 11:00 pm. To our utter surprise and delight the lead flight attendant announced that we would be served a steak dinner thanks to the orchestra management. We felt no pain as the two and a half hour flight progressed. Perhaps due to the wine that flowed as well? 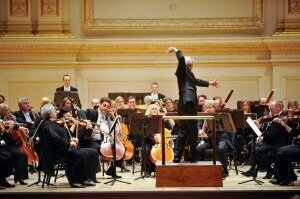 Carnegie Hall : Me and Osmo

When we were nearing Florida, we got the distinct feeling that the plane was circling. We were well into the wee hours of the morning and past the time we ought to have landed. The aforementioned stewardess informed us that due to dense fog we would not be able to land in Sarasota — our destination on the west coast of Florida. We would have to land in Fort Lauderdale on the east coast — a good three hours away by bus. (They hesitated to mention that the much smaller airport in Sarasota was closed in any case by this time of night.)

Much to our dismay, once we’d disembarked and retrieved our suitcases we learned that A) there were no busses to be had in Fort Lauderdale at 2:00 am. B) The busses that were waiting for us in Sarasota were on their way to Fort Lauderdale to pick us up. And C) there was virtually nothing to sit on except the baggage carousel or our luggage while we waited. After three hours of waiting and then another three hours on busses we arrived in our hotel rooms at 7:00 am. We were disgruntled. We had to sleep away most of our coveted day off in Florida! The lovely concert hall there made up for the dreadful trip! 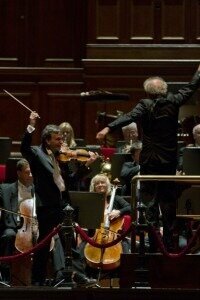 Gil Shaham and me in Amsterdam

There is considerable lore about the Minnesota Orchestra tours during the 1950’s, the ‘Orchestra on Wheels.’ Tales from that time include substandard accommodations in motels or on berths on trains, musicians showering at local YMCA’s and performances in churches, gymnasiums or tents and orchestra members having to pay twenty-five cents to the management for rides between the hall and the hotel.

In 1957 the orchestra embarked on a 40-day odyssey covering more than 200,000 miles to venues in the Middle East. Performing under the baton of Antal Dorati, they garnered critical acclaim despite the fact that many of the audience members had never heard an orchestra from the west before. Gastrointestinal issues along the way resulted in musicians coming home many pounds lighter.

During that time one of the violists started the tradition of a unique orchestra cheer. To this day after a flight lands you hear a raucous: “La-bee-da-bee-da, dostayava, Hey!” to the second theme of the Finale of Tchaikovsky’s Symphony No 4. Roughly translating as “enough”, it didn’t necessarily mean: enough of this flying and traveling already! It meant enough of this symphony, which apparently was performed umpteen times on a certain tour. Now keep in mind that our flights tend to be commercial flights. Often the other fliers are decidedly taken aback by our exuberance.

Our 2004 tour to Europe we performed in Glasgow, Scotland, a city with few choices of hotels that might house the entire tour group of musicians, staff and family members. We ended up at an older hotel. The hotel staff seemed stunned when the chaotic rush descended upon them — one hundred musicians trying to get keys and check in so that we might race out to grab food — food always being the priority — before the buses arrived to take us to the hall. We crammed our luggage and bodies into the two ancient elevators like so many sardines. Suddenly there was a jolt and the elevator stopped abruptly. A seriously claustrophobic musician frantically reached for the rotary phone that was in a small drawer. We were sweating as the temperature started rising. Somehow we had to keep calm. None of us had this kind of chamber music in mind! 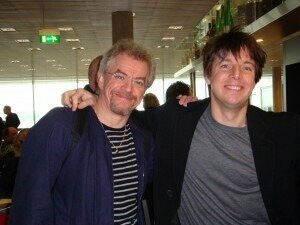 After several minutes the claustrophobic musician was determined to try to open the door to the elevator. The technician warned us about the danger of doing that. Slowly the technician managed to safely open the door so we could breathe. We were caught three feet below the floor. We could see our colleagues’ feet as they walked by along the hotel hallway gleefully laughing and taking photos of us between floors. Eventually we were assisted out… with no time for a bite. The concert included a new work by Aaron Kernis Color wheel, Prokofiev Romeo and Juliet and Tchaikovsky Violin Concerto with Joshua Bell as soloist. It was a big success although our stomachs may have pushed the tempos forward!

Our luggage was often collected the evening before a flight to expedite the check in process. We’d carry our morning toiletries. That all ended with the rule 3-3-3 — limiting liquids to 3 ounces. That year we were issued one-gallon plastic baggies with our names imprinted on them. Once we completed our morning ablutions we surrendered our baggies containing our toiletries to the staff, who placed them into a large rucksack to check at the airport. When we arrived at the hotel after the flight, to add to the chaos of getting room keys, our baggies were spread all over the hotel floor displaying our pajamas, toothbrushes, makeup and underwear!

Today security is no laughing matter. Gone are the days that all eight cellos were strapped into the first two rows of the aircraft. On a recent tour no one was allowed to take any instruments through the airport or onto the planes. Our esteemed soloist, who owns a Stradivarius, was distressed. She didn’t want to let the violin out of her sight and it would also mean no practicing for a couple of days. The soloist audaciously took her violin out of its case, placed the instrument under her arm and draped her overcoat over it. Thus she was able to smuggle the precious instrument onto the plane. Her performance of the Sibelius Violin Concerto was flawless.