Time marches on and in music, you have to keep track of it. Before we get to time signatures, we have to talk about notation of pitch duration, i.e., how long is a note? In yet another example of a common language that proves to have major differences, English names for pitch durations are very different between the US and the UK. 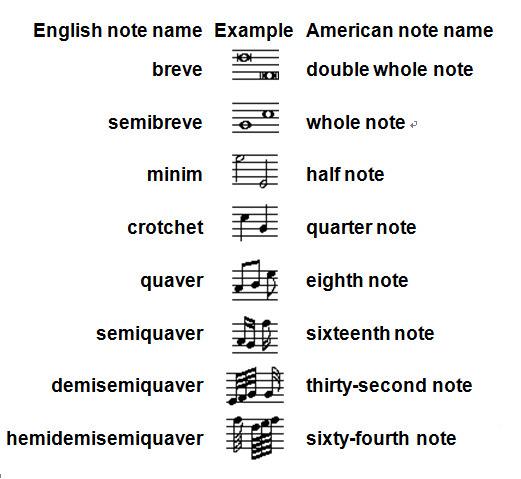 How did the names get so separated? When you look into mensural notation, many of the same names recur: 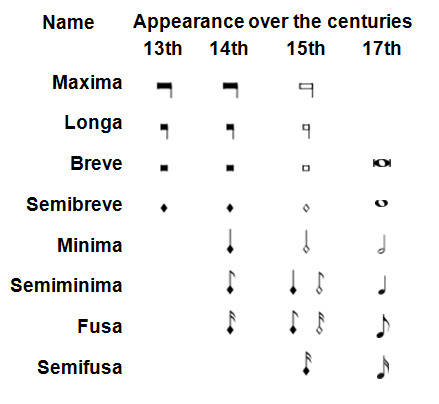 Ah, there’s the Breve, Semibreve and Minim – here called the Minima – but the Semiminima becomes the Crochet, the Fusa is the semiquaver, and the Semifusa is the demisemiquaver. Why did the British follow only half the path?

For the answer in UK usage, we have to move from Latin to French. The French gave us the word “crochet,” meaning little hook. This word is still used in English with the same meaning, as in ‘crocheting and knitting.’ Instead of a little metal hook used to manipulate wool, however, this little hook refers to the little hook used from the 14th century to cut the value of the mimina in half. By the seventeenth century, as you‘ll see from the chart, the semiminima lost its hook, but the name still remains.

The quaver (eighth note) seems to take its name from one of its traditional uses – the quavering tone of a trill. Once you get to the quaver, it’s easy to divide and divide: semiquaver (sixteenth note), demisemiquaver (thirty-second note), hemidemisemiquaver (sixty-fourth note) and so on. As the durations get shorter, the names get longer! You’ll find semihemidemisemiquavers (hundred twenty-eighth notes) in Mozart and even two hundred fifty-sixth notes – there seems to be no English equivalent for that but this six-flagged note is a Zweihundertsechsundfünfzigstelnote in German. For even faster values, you just keep dividing the note in half and adding a flag: the 512th note has seven flags or beams; the 1024th note takes eight flags; the 2048th note has nine flags; and the 4096th note has ten flags. Theoretically, you could go on forever, but it would all be rather unplayable and over very quickly. If you’re doing computer composition with the aid of your computer, the shortest notated duration supported by any programme is the 4096th note, which can be found in Finale.

The influence of French thinking on English names is apparent as is the German sources behind the American ones – each version of “English” thus shows how far apart the roots can be.