No, I did not go to the Hong Kong Stadium, decked out in fancy dress, shouting and singing, flag in my left hand, can of beer in my right. In fact, I was sitting in front of my computer, trying to finish my article about the London Handel Festival, when my son came up and turned on the TV to watch the Sevens final.

As we all know, bonding and sharing time is extremely important in the parent-child relationship, so I tore myself from my computer to watch the final with Gabriel. In any case, I couldn’t really concentrate with the TV on. I opened a bottle of champagne, prepared some snacks, and settled down next to my baby (who is over six feet tall, by the way), my head nestled on his shoulder. 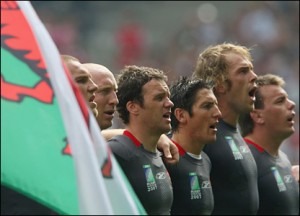 However, I’m the first to admit that I know nothing about the Rugby Sevens. I have never understood why a bunch of big boys got so excited about running round after a ball, be it in a game of rugby, football or soccer. Staring intently at the screen, all I could see were guys running at an incredible speed, throwing the ball to each other, being caught by other guys, tearing each other’s clothes, grabbing each other’s limbs, falling about and generally making a big mess, just to get the ball to the other side!

I tried to make sense of the rules. Why seven players? Why seven-minute halves? Actually, why Seven? It’s not even a lucky number. And why four categories? Cup, plate, bowl and shield? They don’t even sound glam, do they? Then I was asked to keep quiet and just watch!

Finally we reached the Cup final – the ultimate game with the highest ranking, thus deserving the title “Cup”. The two strongest teams, New Zealand and Samoa, had earned the right to compete against each other. For the grand final, each half is extended to ten minutes (don’t ask me why) and they also play the national anthem before the game.

Now we are talking about music – ah ha!

Both the Kiwi and Samoan national anthems were sung a capella style, without any accompaniment. And I must admit, it was the first time I had heard either anthem. New Zealand actually has two national anthems, one being “God save the Queen”. However, at the Sevens, they played the second one, “God defend New Zealand”. Samoa’s anthem was adapted in 1962, the year it became independent from New Zealand, and it’s called “The Banner of Freedom”.

I don’t think there are any national anthems of outstanding musicality. Most were composed by little-known or completely unknown composers, with only a few exceptions.  Germany’s “Das Lied der Deutschen ” was written by Haydn, and Austria’s “Land der Berge, Land am Strome” was credited to Mozart. However, when you listen to the interpretation with all the added heavy brass and drums, they all sound more or less the same.

However, regardless of the score and the outdated lyrics, national anthems evoke deep-rooted feelings, a sense of belonging, unity, pride and patriotism. So when I watched the Kiwi and Samoan teams, singing their national anthems with their hands on their hearts, tears running down their cheeks, I was deeply moved by these big boys.

It brought back memories of when I was a little girl, attending some obscure kindergarten in Shanghai. We also had our song. Remembering the music was easy but I used to struggle with the lyrics, pretended to sing and trying to mimic my classmates. Nevertheless, I was extremely proud of being part of the playgroup.

That is the power of music. Regardless of age, intellect or social background, it draws people together. Music – the universal language.