Artists Behind the scenes
In touch with Harry Fehr:
The Philosophical Director
by Jenny Lee July 26th, 2013 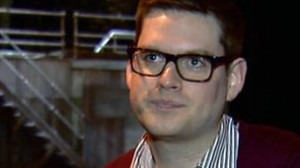 Harry Fehr is the opera director who once told The Scotsman that he ‘would avoid Wagner at a dinner party’. Yet in April this year, he directed an intriguing production of The Flying Dutchman, re-shaping the title role as the captain of an oil tanker off the north-east coast of Scotland. The reason for ‘avoiding’ Wagner for a long time was because of the philosophy and politics surrounding his work and that ‘with him, you have to sign up for a whole lifestyle choice’. Fehr’s seriousness on interpreting Wagner’s work is almost like Brahms spending 21 years to compose his first symphony because of the great legacy of Beethoven. Perhaps owing to his study in philosophy at the University of Nottingham, Fehr would never settle for superficiality. Harry Fehr is reviving the Royal Opera’s production of Verdi’s La Traviata at the Guangzhou Opera House in September. Here, he talks about the production, passion for opera, career path, favorite directors, and books that keep him company now.

JL: What is special about this production of La Traviata in Guangzhou Opera House?

HF: This is a very beautiful production, brilliantly capturing the decadence and style of mid-19th Century Paris. It made a star of Angela Gheorghiu back in 1994, and the Guangzhou Opera House has engaged two exciting sopranos from the next generation of emerging stars, Maria Agresta and Lana Kos, to sing the consumptive heroine. Bringing his great experience and authority to the podium will be Daniel Oren, already known to Guangzhou audiences. All together, it should be an exciting and moving evening of music-theatre.

JL: What are the important qualities in being a stage director?

HF: I’m not sure there is a single set of qualities which a director must have. Some have a great eye, some are movement experts, others have interesting ideas to impart. It is this variety which brings richness to the theatre scene, and particularly to the opera scene, which is largely restricted to a small core repertoire of pieces. However, I would say that all directors need to work well with other people, and to be able to draw the best out of them.

JL: Why did you study philosophy instead of theatre studies in university?

HF: When I left school I wasn’t yet sure what I wanted to do as a career. I’d always enjoyed amateur theatricals, but at that time, I wanted a job which would be more stable and less competitive than that offered by theatre. I therefore chose a more traditionally academic subject, to give me greater flexibility on graduation.

JL: How and when did you develop a passion for opera?

HF: I grew up in a small town in south-east England, about 90 minutes from London. Every term, the head of music organised a trip to the English National Opera, and it was there that I got my first taste for it. While at university, I used to see productions by Opera North, a regional touring company in the north of England, but it was only when I moved to London after university that I started going to the Royal Opera, and it was there that I truly grew to love the art form.

JL: Do you sing or act or design set at all?

HF: I sang and acted while at school and university, but I’m not very good at either! I’m certainly not a frustrated performer, which is what people often assume. I designed the shows I directed as a student, if one can really call them ‘designed’, but, again, I know my limitations. I don’t envy directors who design their own shows; for me, working with a design team who challenge and stimulate me is one of the most enjoyable aspects of the whole process.

JL: Do you have any favourite stage director or film director?

HF: The British director Katie Mitchell is the person whose work has most influenced my own. I was lucky enough to assist her on a production at ENO several years ago, and learnt from her the value of investing time in investigating characters’ back histories, and imposing tight parameters within which the performers can then explore. Although less influential on my own work, I also hugely enjoy that of Richard Jones, who has perhaps the most distinctive style of the major opera directors working today. When it comes to film, I am in awe of the precision and subtlety of Michael Haneke.

JL: What are you reading at the moment?

HF: I tend to have a novel and a work of non-fiction on the go at once. I’m currently, finally, reading Anna Karenina (having put it off for years) and a book on Georgian domestic taste.