Blog
The life of Martins
by Marco Moraes August 11th, 2011 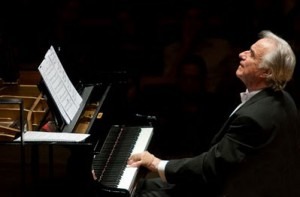 The opening scenes of the Irene Langemann’s documentary Die Martins-Passion (Martins’ Passion, 2004) are exquisitely adequate in presenting the life of Brazilian pianist Joao Carlos Martins: a grand piano is hoisted up dozens of floors outside an apartment building in central Sao Paulo. The image is as surprising as it is poetic – the piano rises above buildings and treetops, while on the pavement a man directs the workers who are pulling the ropes, moving his hands like a conductor leading an orchestra. Music rising above the realities of the street and difficulties of life is an apt summary of Martin’s life and musical career. For over fifty years, Martins has known the peak of the international piano scene, depths of injury and depression and a wildly successful conducting job. As in the opening scenes of the documentary, the soundtrack to this journey is all Bach. In this first piece about Martins, I propose to write about his life, whereas the next one will focus on his playing.

Few musicians can claim as varied and eventful a life as Martins – for better or for worse. Like a triptych, he has had three main phases. First Act: born in Sao Paulo in 1940, he was a child prodigy in the piano and, from his Carnegie Hall debut at twenty (playing Bach’s The Well-Tempered Clavier), was hailed for his expressive, inventive and masterful interpretations of Bach. Throughout the 1960s, playing with most of the great orchestras in Europe and the Americas, Martins achieved world-wide fame and a reputation as the most skilful and brilliant interpreter of Bach since Glenn Gould. In fact, many thought him better than Gould. But any comparison is, ultimately, pointless; their styles of playing are so very different – in counterpoint to Gould, Martins is a charmer, a warm and charismatic personality. He overflows with witty anecdotes about meeting Salvador Dali, or the special female audience he had in one of his earliest concerts (I don’t have the heart to give them away here – the documentary is very much worth watching). And his playing style was often linked to this very Brazilian side of his personality: the exuberance, the creativity, the tonal variety and the eclecticism of Martins were the hallmark of his performances.

Martin’s career has been, however, turbulent. At the height of his success, in 1969, he had a football injury in New York, which severely hindered the use of his right hand. Crushed, Martins decided to leave music behind him, sold his piano, moved back to Brazil and embarked on various careers – as a financial investor, as manager of a champion prize fighter and even, briefly, in politics. As a testament to his intelligence and hard work, he actually turned out to be very successful in most of his endeavours. Nevertheless, in time, music beckoned him and he returned to the piano, teaching himself to play with more emphasis on his left hand, creating music that was exciting and unique.

During this second act as a virtuoso, Martins played countless concerts to great praise and, between 1979 and 1998, he recorded Bach’s entire keyboard compositions. These recordings became instant classics and are hailed by enthusiasts the world-over. During this period, Martins had to overcome unbelievable bad luck: in 1995, having left a session of the Bach recordings in Sofia, he was attacked in a random mugging and beaten senseless over the head. The attack left his right hand almost completely impaired. But he was able to perfect his left-handed technique and came back for a standing ovation at Carnegie Hall in 1996. By the late 1990s, however, the extraordinary effort required in decades of unnatural practice exerted a heavy toll and, having been diagnosed with a severe case of Repetitive Strain Injury, Martins had to undergo surgery which left him unable to play.

So began the third act; around 2003, Martins emerged from a sad period away from the spotlights to reinvent himself as a conductor. Teaching himself to conduct, he founded the Bachian Orchestra in Brazil, one of the world’s best orchestras for Bach. He has since given several hundred concerts with this group in the Americas and Europe, as well as being a regular guest conductor with many of the world’s finest operas – his recording of the Brandenburg concerti with the English Chamber Orchestra, for instance, is spectacular.

This stage of Martin’s career has been marked by his initiatives to spread the love of classical music in Brazil, where – ironically, since we have so many excellent musicians – it is still not very popular. An example of his – and Bach’s – growing popularity among Brazilians was the choice of the Vai-vai samba school to honour Martins in the 2011 Sao Paulo carnival, which lead not only to the surreal sight of Martins mock-conducting the samba school, but also to the pleasantly surreal image of a ten-meter Bach bust parading down the avenue. The school won the top prize, so something worked very well.

So it has been – a fantastic life, with surreal twists and turns and an inspiring present. Next week I shall write about the soundtrack to this story.