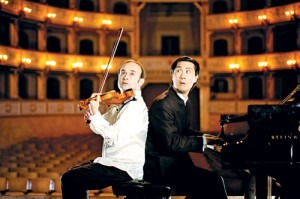 Orchestral musicians like to have fun just like everyone else. We may appear dignified but fooling around is a requirement; pranks are ingenious. Sometimes the joke is on the conductor. There was once a conductor who was not, shall we say, adored by the orchestra he was conducting. One day during a rehearsal of the Mozart Symphony in the key of A major, the strings conspired to play the entire opening of the piece up a half step—in B-flat major. The poor conductor had no idea anything was amiss until the woodwinds entered a few measures later in the correct key. OUCH what cacophany! This is not necessarily an unusual occurrence. During the Colorado Festival several years ago, a very green and disagreeable fellow was to conduct a pops concert. Everyone agreed to play up a half step. But the key of the March was in E. Playing up a half step meant that everyone had to play in the very difficult and unusual key of E-sharp. Grinding dissonances ensued because nobody could transpose into the key of E sharp! After the intro everyone returned to the correct key. The look on the face of the conductor was priceless.

Sometimes a musician may play inadvertently in the wrong key. This happened recently during a performance of a solemn piece, which was written by composer Steve Heitzig. The work Blue Liberty portrays the composer’s emotions after the 9/11 attacks on the twin towers in New York. Manny Laureano the principal trumpet of the Minnesota Orchestra was to perform the extended a cappella solo as he put it, “reminiscent of a lonesome bugle call.” Despite having played it many times, the solo had always seemed challenging…except this time. “Hey this feels really easy,” Manny said to himself, “It’s right in the pocket. Cool.” As the solo proceeded, he noticed that the conductor was looking at him quizzically, and several colleagues were giving him the “What the heck??” look. Manny sensed that something wasn’t right but he kept going as he quickly scanned the music looking for what might be amiss. He soon realized that he was playing a whole step lower than written. Manny panicked. He made a quick decision. Instead of finishing the solo in the wrong key he played the last four notes correctly, which made the whole thing sound even stranger. This time it was the conductor who raised his eyebrows, giving Manny a cold sober look. The entire orchestra could scarcely subdue their mirth. 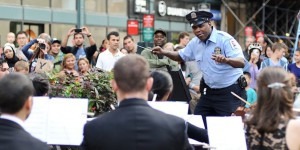 When Sir Andrew Davis was music director of the Toronto Symphony, he lost a front tooth.
You can imagine how self-conscious he was about it, facing one hundred musicians. During the lunch break someone hurried out to purchase a special concoction and quickly shared it with most of the orchestra members. When Andrew raised his arms to conduct after lunch, no one played. They all grimaced horribly at him—each with a front tooth blacked out.

Performing in an orchestra can be like any job—boring at times, especially if the music is something we’ve performed a lot. Typically, the violists will concoct practical jokes to shake things up. Once during a concert the conductor turned a page of his score only to find that someone had pasted a large X-rated, risqué photo onto the music, which no doubt could be seen from the balcony in the audience. Red-faced the conductor whipped the page over as fast as he could, hoping that he didn’t miss any beats. Another time someone fastened several pages of our cello part together during a Mahler Symphony. I fumbled to rip the pages apart while we tried to keep the cello section from coming unglued.

There have always been musicians who take their comedy seriously—Victor Borge, Danny Kaye, P.D.Q. Bach and in our time, Igudesman and Joo. The orchestra is quite happy to participate in the merry making. Nonetheless the level of playing continues at a high level as occurred recently with the famed violinist Gidon Kremer with his Kremerata-Baltica orchestra and Igudesman and Joo, singing, dancing, kicking and carrying on.

Today, bloggers proclaim the demise of classical music and opera. It is all the more important for the public to understand that the music and musicians are serious but not humorless. Take for example the recent Philadelphia Orchestra tour. They were delayed on the tarmac for three hours waiting for their flight from Beijing to Macao as part of the 2013 Residency and 40th Anniversary Tour of China. So what did they do? They took their instruments out and played for the passengers on the plane.

An orchestra of musicians, in fact, travels around their town pranking people with their music. They might play while a crowd waits at the street corner for a red light to change, or subject unsuspecting apartment hunters to “The Shower Scene.” Musicians have taken to the streets in flash mobs performing in airports, on trains, in malls and in public squares to titillate and captivate audiences. My favorite is in a link below. This YouTube went viral! Ordinary people have been invited to try to play and to conduct and everyone has a great time given half a chance. The classical music world is never dull. Enjoy the music, knowing that the musicians are enjoying it and themselves too!

Kremer and Igudesman and Joo (orchestra having fun!)