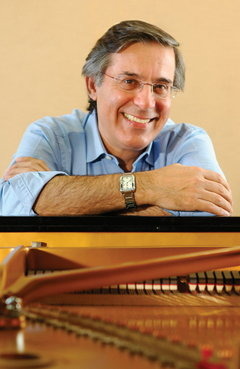 Recently, in Sao Paulo, I lived through a perfect example of the surreal music scene in Brazil. It was a wintry Sunday afternoon. We went to Sala Sao Paulo, the concert hall home to the Sao Paulo State Symphony Orchestra (of which more to come in these pages) and tried to get tickets for a concert the following week. Disappointingly, there was none left. We briefly thought about buying instead tickets for a piano recital by Arnaldo Cohen, one of Brazil’s finest pianists, for that evening, but the only seats left were prohibitively expensive. The lady in the tickets office, noting our frustration, dropped a few tones in her voice, leaned over the counter and, with a conspiring look, said “go to the lady in the blue dress over there – she can give you some free tickets for tonight”. Before I could ask her to elaborate, she sat back in her chair and looked stern. I thought it wise to ask no more and went over to the lady in blue who, as it turns out, did have a huge pile of tickets for that evening’s recital and gladly gave us some. Soon she was encircled by other people and I was left in the dark about how that had happened.


Later, when she was alone, I went over and asked who I should thank for the tickets. She replied “Thank Brazilian pianists”.

It was profoundly poetic, but equally enigmatic. She explained that the recital was the start of a year-long programme put together by an organisation called Brasil Piano Masters, for which she worked. This newly-formed group seeks to promote young classical musicians in Brazil, who encounter formidable difficulties to establish themselves professionally. Sadly, Brazil – so well-known for its more recent music – does not have a good structure for classical musicians and does not have a great classical musical culture. This is at odds with the unbelievable amount of excellent musicians the country produces. Like Joao Carlos Martins, who I have written about lately, most of these artists need to leave the country to establish themselves, to develop their art – and, most importantly, to make a living.

Brasil Piano Masters, therefore, seeks to reconcile these two sides. It holds concerts and events with great Brazilian pianists in order to gather funds for and promote the work of young musicians. It publishes its programme on a website (http://brasilpianomasters.blog.br/ – in Portuguese). The recital I attended, by Arnaldo Cohen, was the first one. To follow they will have concerts by greats such as Christina Ortiz. The organisation also develops projects of musical education for children and teenagers, as well as musicotherapy work with medical patients. It is entirely self-funded (in that it has no State sponsorship) and lives off private donations and the funds it raises from concerts. It was in this sense that I was told to “thank Brazilian pianists”.

The lady I talked to that evening in Sala Sao Paulo mentioned that, that being the first concert, they were still testing the waters in relation to pricing the tickets, and ended up with a huge batch of unsold seats. I thought it was sad that there were so many tickets they were giving away, while the ticket office was charging so much for them (and I can imagine the ire of the people who did pay, only to find that their neighbours in the audience got in for free). No doubt many people were put off by the high price that had been advertised in the first place. In fact, I am sure of this: I was one of them (remember I had actually gone there that day seeking tickets for another – cheaper – concert). And yet, despite such hiccups, the organisation seems to be flourishing and it was with a happy mind that I later sat down to listen to the recital.

The recital itself was masterful. Cohen is a former professor in the Royal Academy of Music and the Royal Northern College of Music, a past juror of the Chopin Competition in Warsaw and currently a professor at the University of Indiana. Nevertheless, in his bio, he prefers to describe himself as “a former violinist, maths and physics teacher and cocktail pianist”. Of course, he has nothing to be humble about: the depth of emotion which he displayed that evening was amazing and the technical virtuosity, unarguable, doing justice to his world-wide fame. He played a selection of Liszt pieces, starting with the Soneto del Petrarca no. 104 and ending with the Sonata in Si minor. I had never heard these pieces live, and to do so by as accomplished an artist as Cohen, in such surreal circumstances, was a unique experience.