I took my mother to Taipei for a short holiday and as usual, was on the lookout for classical music events.

When I read online about a major event dedicated to Tyzen Hsiao, praised by the local media as “Taiwan’s Rachmaninov” and “Taiwan’s last Romantic poet of the piano”, I did not think twice, and got us two tickets for the concert, to be held at National Concert Hall.

The Concert Hall exhibits typical Chinese features and stands majestically at Liberty Square. The pipe organ, purportedly the largest one in Asia when installed in 1987, is indeed very imposing and intimidating from the stage; in fact, the whole place is quite grand compared to other venues I have been to in Asia.

The concert started with the Piano Concerto in C minor, performed by Chiao-Ying Chang, and accompanied by NSO (National Symphony Orchestra) under the baton of Wen-Pin Chien.

I was impressed by the serene musicality and the harmonic richness of the work. The composer’s similarities with Rachmaninov were obvious in terms of melody and structure, but unlike his celebrated alter ego, there were no real highlights or phrases catchy enough to be remembered.

The second part started with the Cello Concerto in C, performed by Lana Hsiung. The cello’s solo introduction was dramatic, and immediately, followed by a flow of lyrical and expressive passages. The whole piece was beautiful and interesting, but unfortunately, not deeply engaging.


At this point, I felt quite disappointed because so far, the music was nice, yet pretty neutral. I must say that the soloists were not doing any favours to our Taiwanese Rachmaninov, Ms. Chang played the piano decently, and followed the score diligently, note by note, without letting her hair down. There were no passion or thought put into the interpretation. And Ms. Hsiung was extremely nervous, seemingly more into trying to keep her score in sight rather then expressing musically with her cello. And the orchestra –­ they just followed methodically.

The last piece of the evening was the Symphonic Dances, Op.45 by Rachmaninov himself – now this is what I called bad planning, bad marketing and bad strategy!

The concert should have been a 100% Tyzen Hsiao-dedicated programme, or, if it was really necessary to complete the evening with a completely different piece, the choice should have been either Vivaldi or something light from Mozart – nothing from the Romantic period. It seemed like utter nonsense to me, to follow a derivative composer with the real deal.

But suddenly, the whole orchestra woke up, and along with Wen-Pin Chien, delivered one of the best Symphonic Dances I’ve heard. The music was uplifting and colourful with all the kaleidoscopic nuances. This is Rachmaninov, I thought, this is Russia in the full bloom of the Romantic era, and at last, this is something that is unique.

Nevertheless, after the concert, just to do justice to Mr. Hsiao, I bought his CD with all his concertos, and I now am sitting and writing as I listen to the CD, recorded with the Russian Federal Orchestra with the folliwng soloists: Alexander Trostiansky for the violin concerto, Kiril Rodin for the cello concerto, and Anatoly Sheludyakov for the piano concerto.

I must say the experience is quite different from the concert; after a few rounds of listening, I understand and appreciate the work much better. It just goes to show how important soloists are, and how getting the wrong ones can be a catastrophe for the music.

This is not my first time in Taipei, but it was definitely a very nice experience.

I used to have a certain image of the Taiwanese, after reading regularly about fights between politicians in the newspapers, including pictures that showed them pulling hair, beating each other, even women… but after this trip, I must say that the Taiwanese are probably the most polite of all the Chinese cultures in the world.

We, the Chinese from Hong Kong, are quite arrogant. We think that we have seen it all, done it all, and that all the others are just peasants. We accuse the mainland Chinese of being rude and “nouveaux riches”, which to a certain extent is true – they have the new money, and a lot of it. So why bother being nice and polite? In Taipei, however, everybody – from hotel staff to restaurant waiters to taxi drivers ­– is nice, polite, helpful and always with a smile… indeed, a very rare and most pleasant experience.

The only thing I did not like about Taipei, which is a pet peeve that has followed me from Hong Kong, is that although the weather was pretty cold, everybody still turns on the air condition full force everywhere. It’s a waste of energy and money, and is extremely environmentally unfriendly.

That grievance aside, we really had a good time in Taipei, spending hours at the Eslite Bookstore, one of the biggest (or maybe even the biggest) Chinese bookstore in the world.

We stayed at a small, newly opened boutique hotel called the Park Hotel Taipei, which was very cosy and comfortable, as well as conveniently located, with an extremely friendly team – this is definitely the place that we will return. 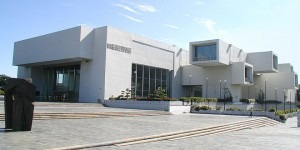 Apart from the National Palace Museum which is a must-see, we also went to the Taipei Fine Arts Museum, where there was a major exhibition of works by the famous Chinese artist Cai Guo-Qiang. We also hit the Museum of Contemporary Art Taipei for the Animamix Biennale. The museum is housed in a 1920s elementary school, and the two-storey brick building is big enough to stage a substantial exhibition, while retaining a sense of intimacy to make the whole experience accessible and comfy.

Taipei is famous for food and snacks, and of course, over the course of almost one week, my mother and I indulge in all sorts of fare, morning, noon and evening!

The ones that I would recommend, unfortunately, will have to be written in Chinese, as even after intensive searching, the English names are not to be found.

For the famous xiao long bao, forget the tourist trap Din Tai Fung, go instead to 點水樓, where they just earned a five-star rating from the local media (trumping Din Tai Fung’s three). The dishes are tasty and creative, while the service is friendly and helpful, making this a must-visit restaurant.

For Taiwanese cuisine, go to 銀杏, which is not as famous as Shin Yeh, but definitely better, more refined and subtle.

As for the wines, this is quite disappointing, as either you have beer (which has never been on the top of my list), Chinese rice wine (nice but too sweet for me), or sake, which I love, but the selection ususally consists of one choice, and not the best one at that.

For our last dinner in Taipei, right after the concert, we went to Just In Bistro, opened by Justin Quek from Singapore, one of the only restaurants still serving after 10pm.

It is mainly tapas, a string of delicious dishes such as marinated cherry tomatoes with olives, grilled mushrooms, fried calamari, crispy pizza…. all washed down with a bottle of champagne.