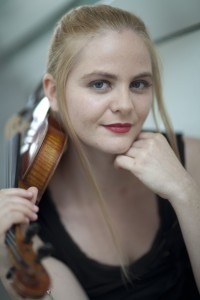 “Solenne Païdassi has won the Baltic International Violin Competition. {…} She won because of her very intimate style of interpretation and her spontaneous, unprompted joy in playing music. She also demonstrated richness of sound and wide dynamics from subtle piano to full-size romantic forte” – The Strad Magazine, February 2008.

French violinist Solenne Païdassi is the winner of the 2010 Long-Thibaud Competition. She has received numerous prizes in France and abroad, including in the 2009 Hannover Competition, the Sion-Valais Competition, and the Gyeongnam Competition in Korea. Her music has been broadcasted by France Musique, the Deutschlandradio Kultur and the NDR Kultur radiostations. She plays a Lorenzo Storioni Violin of 1779, awarded by the Deutschen Stiftung Musikleben Hamburg.

Solenne Païdassi has an extensive experience in giving recitals and concerts all over the world, in countries such as France, Switzerland, Korea, Japan, Germany, Poland, Mexico, Italy, Ukraine, USA…She has performed in Tonhalle Zürich and Carnegie Hall New York, as well as participated in numerous festivals such as “La Folle Journée” of Kanazawa in Japan, the Festival International du Jeune Soliste in Antibes, the Festival International de Sion Valais, the Festival de Musique Sacrée in Nice, the International Holland Music Sessions, the Tongyeong International Music Festival. As a soloist, she has performed with the Orchestre de Radio-France, the Sinfonia Varsovia Orchestra, the NDR Philharmonic Orchestra, the Orchestre Philharmonique de Nice, and the Korean National University of Arts Chamber Orchestra, under the baton of Shlomo Mintz, Jacek Kaspszyk, and Jaime Martin. Her upcoming concerts include performance with the Sinfonia Varsovia Orchestra, the orchestra de Radio-France, and the Orchestre de Cannes. This year, as a “New Masters on Tour” from The International Holland Music Sessions, she has taken part in an international concert tour, playing in renowned concert halls including the Concertgebouw in Amsterdam.

After graduated from Geneva Conservatoire de Musique, the Royal Academy of London, and the Curtis Institute of Music in Philadelphia, she obtained a Künstlerische Ausbildung Diploma from the Hannover Hochschule für Musik und Theater. She has been a student of Jean Pierre Wallez, Joseph Silverstein, Viktor Danchenko, and Krzysztof Wegrzyn. She has participated in master-classes in Europe and the United States with Shlomo Mintz, Pierre Amoyal, Gerard Poulet, Viktor Tretjakov, Lewis Kaplan, Nam Yun Kim, and Koichiro Harada.

Ms. Païdassi is currently 25 and resides in Hannover. She is an active member of the ensemble “Il Gioco col Suono”, and the recipient of the “Yehudi Menuhin: Live Music Now” Scholarship.
Credit : Concert Talent
Related videos: