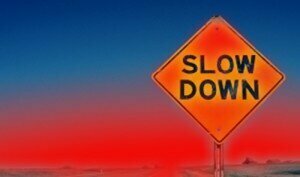 Today we seem to spend far too much of our daily lives trying to do things at high speed or in a hurry, without allowing ourselves time to stand still and think, or to look up occasionally to admire a beautiful sunset or a starlit sky, or to listen – to the birds singing in the garden, or to the beauty and intricacy of a Bach Chorale. Or to just sit quietly and do nothing, even for just a few moments.

As a food-lover as well as a pianist, I have an interest in the Slow Food Movement and concur with many of its values, and I think similar values could be applied to the way we play and teach, study and listen to music.

Many, many teachers and professional musicians advocate “slow practice” – playing a piece at half-tempo, or slower, to allow one time to examine all its elements, and to consider and learn them properly. When I’m teaching, I find that most students want to rush headlong into pieces, and to be able to play everything that is put before them very fast and (usually) very loud. Children (and some adults) do not always have the patience or the understanding to take time to acquaint themselves properly with the way the music is constructed, to look for the composer’s signposts, and to consider, before playing a single note, the kind of sound, mood and character that the music requires.

I stood outside the door, unable to believe my ears. Rachmaninov was practising Chopin’s etude in thirds, but at such a snail’s pace that it took me a while to recognise it because so much time elapsed between one finger stroke and the next. Fascinated, I clocked this remarkable exhibition: twenty seconds per bar was his pace for almost an hour while I waited riveted to the spot…

Slow practice is often the only way to tackle tricky or rapid passage work, awkward chord progressions, or uncomfortable fingering; it is also the best way to become really intimate with a piece of music, to understand the composer’s intentions and to examine all the details and architecture of the work. Listen to Murray Perahia or Glenn Gould playing Bach and you can hear from the way the music is played that these pianists (and they are not alone) have taken the time to understand the music intimately, not just the big gestures but all the interior structures, textures and colours as well.

Bach: Toccata from Partita No. 6 in E Minor, BWV 830 (Murray Perahia)
Some years ago, when learning the trickier parts of the Toccata from Bach’s Partita No. 6, my then teacher suggested playing it “in the manner of a Chopin Nocturne” – i.e. slowly and mostly quietly. I was amazed at the difference this made, not just to the sound but also to the feel of the music under the fingers: my hands and arms were instantly more relaxed, more languid (but no less alert), as Bach’s Baroque arabesques were transposed to a 19th-century Parisian salon. Bach is always beautiful, but played like this, it was really beautiful, with every line and voice of the four-part fugue clearly defined, which later allowed me to balance the different voices.

Chopin: Nocturne No. 14 in F-Sharp Minor, Op. 48, No. 2
Aside from the practical, technical and musical benefits of slow practice, maybe Slow Piano is also about taking time to really enjoy and savour the music we are studying, playing for pleasure, and listening to, and to encourage others to do the same.

Sviatoslav Richter demonstrating “Slow Piano” techniques in Schubert’s Sonata D894 – one of the most thoughtful readings of this sonata I know. The opening movement is marked molto moderato…