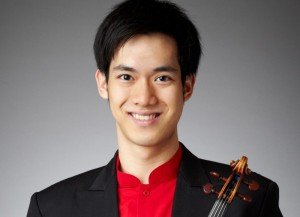 Taiwanese American violinist Richard Lin is no stranger to Hong Kong, having performed at a fundraising event with the Hong Kong Sinfonietta in January this year. He returns this month to play Korngold’s violin Concerto with the Sinfonietta, a piece very close to his heart. The first time he heard the piece was a recording of Gil Shaham with André Previn conducting the London Symphony Orchestra. ‘Honestly,’ he says, ‘I didn’t know the composer then, but I was captured immediately by the warm yet novel harmony of the opening passage, and I fell in love with the piece right away.’

Richard learnt the piece at the Curtis Institute, under Aaron Rosand, and then, in his own words, ‘it was put on the to-do-list for a while.’

This time came in 2015; that year, in Nagoya, Japan, he first performed the concerto with the Nagoya Philharmonic, and later that same year, made it through to the final round of the Joseph Joachim International Violin Competition in Hannover where he won third prize playing the Korngold with the NDR Radiophilharmonie. ‘This is one of my signature pieces,’ Richard says. ‘I believe my musical style matches Korngold’s character fairly well, and I am very much looking forward to proving that in Hong Kong.’

Richard has participated in many competitions worldwide, including the Wieniawski, Singapore and Sendai International Competitions, and traces his introduction to competitions back to his days at Curtis. Arriving in 2008 and seeing his senior classmates on the winning lists of many of the big competitions inspired him to one day do the same, and since 2011 has actively participated around the world.

Speaking about his time competing, Richard states, ‘Oddly, I quite enjoy the process. Competitions to me are the best way to motivate myself to learn new repertoire and experiment different approaches to various styles of music. I especially like the challenge of preparing a massive amount of repertoire in a limited time – it pushes me to become a diligent and efficient person (which normally I am not…).

‘Some may ask, “How do you overcome the nervousness?” Well, for me, the more I prepare, the less nervous I get. So the best advice I could give is to try to treat competitions like concerts: you have to be well prepared, but when you’re on the stage, just enjoy the moment, and express your passion and love through the music.’

Nowadays Richard fulfils his dream of travelling the world and playing the great concerti. ‘Travelling is, most of the time, exciting for me, because I love to encounter different cultures, taste all kinds of cuisine, and make new friends. I am very into history, so I usually search for the background of the countries and cities wherever I go. It’s always so fascinating for me to be in places that historical events happened, or to be in antique architectures. 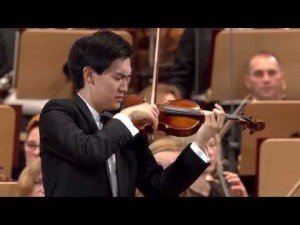 ‘I also very much enjoy sharing my music around the world; I think it’s the best way to communicate with people that have different languages and cultures. However, sometimes as a soloist, I feel quite lonely travelling around the world with only my instrument and luggage… The feeling gets worse whenever I visit a tourist site and want to take photos; selfies seem to be the only option.’

Despite this, Richard loves what he does, and thanks his parents for their involvement with his early musical education. ‘Neither of my parents nor grandparents had any musical training. But my father became a classical music lover in his teens and has been collecting LPs and CDs since then. So during my childhood, I remember there was always some sort of symphony or concerto playing from the speakers.

‘I started to learn the violin at four, and as I grew up, my dad’s collection became the best vitamin for my musical education. I remember very clearly the scene where I was sitting in my dad’s “audio-visual room” and listening to the Bruch violin concerto. In this grandeur orchestral tutti before the recapitulation, I had goosebumps all over my arms – and that’s the moment I made a wish that I wanted to become a soloist and perform many concertos with great orchestras!’

Outside his classical taste, Richard is a big fan of Chinese pop music, and alongside Brahms’ First Sextet, Bartok’s First Rhapsody and the Bernstein Serenade, on his iPod can also be found ‘a bunch of songs from Jay Chou, JJ Lin, and Leehom Wang.’

When not listening to music, Richard can be found in a karaoke bar with friends, or watching sports, particularly the NBA and MLB American professional leagues. He has also recently developed a somewhat rare hobby: horology. ‘I find the mechanism in high-end watches very mesmerising. It’s definitely another type of art form.’

Tickets for Richard’s performance can be found here.