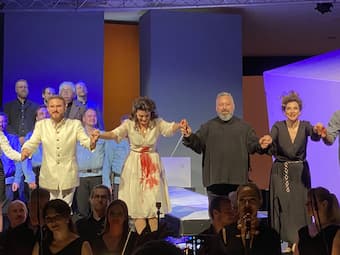 Bad Wildbad is one of the least probable stations on the European summer festival circuit. Small, relatively nondescript and poorly accessible, the spa town in the Black Forest once welcomed Gioachino Rossini when he was seeking cures for his many ailments. Since 1989 the town puts on a Bel Canto Festival focused mostly on Rossini rarities.

The venues are the Königliches Kurtheater, a miniature 19th century jewel, as well as the larger Trinkhalle, literally a “drinking hall”, which has all the charm and acoustic qualities of a high school gymnasium and can accommodate 450 patrons. The festival has built a reputation for artistic excellence, and has benefitted from the attention of Naxos Records which has been recording the complete series of Rossini operas.

Wildbad opened this year’s festival with one of the most challenging Rossini operas: Armida. The opera was commissioned by the impresario Domenico Barbaja who wanted to showcase the state-of-the-art stage technology of the newly rebuilt Teatro San Carlo in Naples (1817). The composer specifically wrote the title role for Isabella Colbran with whom he was just becoming romantically involved. Colbran was to be the sole female protagonist in the opera. All other principals are males, including six tenors. 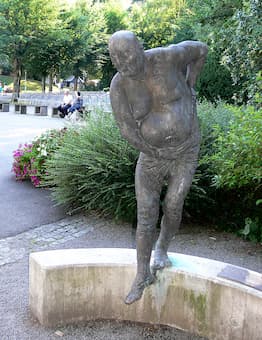 The complication of Armida’s music as well as the difficulty of finding so many bel canto tenors make it nearly impossible to cast. The Rossini Opera Festival in Pesaro, holy grail of all things Rossini, put on a less than satisfying Armida in 2014. Wildbad, conversely, pulled off an extraordinary Armida on a shoestring, without even bothering with stage sets.

The success of this Armida lay in the near magical casting. Angela Meade was scheduled but pulled out well in advance. The replacement was the virtually unknown Spaniard Ruth Iniesta as the sorceress Armida who commanded the stage and the many tenors with her lush and passionate soprano, attacked the coloratura passages with aplomb, and didn’t shy away from any of the top notes.

But the real sorcery lay in Michele Angelini’s Rinaldo. The American tenor boasts perfect technique, keeping his powerful voice free of any pressure. This allows for astounding chromatic scales, trills and glittering coloratura as well as a disarmingly accurate attack of the many high Cs and Ds. Angelini threatened to raise the roof of the Trinkhalle, and was awarded an enthusiastic response.

Rossini must have had this sort of voice in mind for a high tenor, though Rinaldo was actually written for the baritenor Andrea Nozzari. Wildbad cast Moisés Marín as Goffredo, the leader of the crusaders trying to conquer Jersusalem. He proved an inspired choice, catapulting his grainy and rich voice, tackling the embellishments with precision, and playfully exploring the range from baritonal lows to a gratuitous high D#.

Other paladins were Wildbad regular Patrick Kabongo who possesses a passionate and engaging voice though occasionally pressed high notes. Chuan Wang and César Arrieta were the final tenors, providing a perfect foil for Angelini in the trio “In quale aspetto imbelle.”

The second festival performance was Ermione, another opera commissioned by Barbaja. Though it failed to find success at its premiere in 1819, Ermione has enjoyed recent popularity among bel canto lovers. 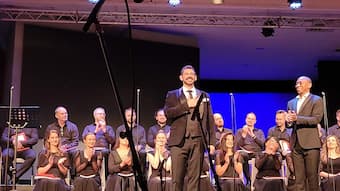 The choice of the lead soprano (again written for Colbran) is the linchpin to this opera’s success. Wildbad picked Serena Farnocchia; again, not an international headline name. The Italian soprano dispatched this extraordinarily difficult role with razor-sharp precision and visceral expression.

She was well matched with a younger Andromaca, who Ermione’s fiancé Pirro is in love with. Italian contralto Aurora Faggioli boasted a smoky and agile voice as well as a sultry stage presence.

Pirro was stunningly portrayed by Moisés Marín. He was as vocally secure as the night before (no rest for the singers in this spa resort!), but also proved a powerful actor. Other revisits were Patrick Kabongo (dramatically convincing as Oreste), Chuan Wang as Pilade and Jusung Gabriel Park as Fenicio.

Antonino Fogliani, closely associated with Wildbad since 2004, brought out the best of the Kraków Philharmonic and chorus.

One of the powers behind the Wildbad Festival, Jochen Schönleber, directed this staged performance and made the best of the very modest technical infrastructure a Beerhall provides. The scale of an Ermione of this quality truly cries out for a larger venue.

While Rossini wasn’t cured in Wildbad, today’s audience benefit from the stimulation of his music at this astounding little festival. And if the operas and the salubrious waters don’t suffice, the tiny Café Bechtle in the town center has been serving a truly divine Black Forest Cake since 1907.