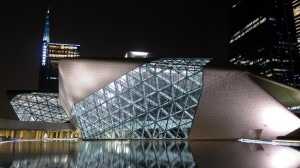 It was recently reported that Hunan province is going to build its very own “Sydney Opera House”, which is due to be completed in 2015. The designer is the renowned architect Zaha Hadid, who also designed the Guangzhou Opera House, which opened in 2010.

It seems that ‒far from abating ‒ the trend in China for building opera houses and concert halls, which started back in the nineties, is actually advancing at a stronger pace. Constructing opera houses and concert halls is now as commonplace as building cinemas. No matter how big or small, rich or poor, many cities either already have top class halls or are planning to build them.

It is said that in two years’ time, Beijing will have another huge complex ‒ a cultural centre on water (isn’t Beijing one of the northern cities with a water shortage?) ‒ at an estimated cost of around 50 billion yuan. In Tianjin, another cultural centre will be built in 2015, despite the fact that the giant Tianjin Grand Theater only opened this year. In the meantime, secondary cities follow the steps of their “big brothers” closely: Nanjing started to build the 2 billion-yuan Jiangsu Grand Theatre this year, and a series of halls, costing billions, are under construction in Ji Nan, Lin Yi and De Zhou, Shandong province, to welcome the so-called art festival next year.

While people in the majority of these cities cannot afford to buy their own homes, most of these lavishly expensive halls, containing thousands of seats, sell, on average, 100 seats or fewer per concert. As most halls are unable to get government funding to support their daily running costs, they have to close the venues and use them only occasionally for conferences or government events. So why do we still think it is important and worthwhile to build so many theatres? And who actually benefits from them? 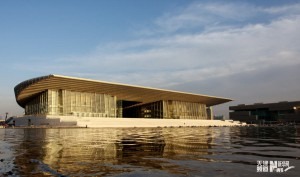 Well, I believe that the architects are the main beneficiaries. While the West often interprets the building of halls as a sign that the future of music lies in China, I would argue that it is actually a spring-board for architects to promote themselves on the world stage. There are, of course, others who profit too: developers, officials and many others along that chain. But from the moment the venue is built, it is already forgotten. I often notice that these new halls are built in remote areas, far from the city and local residences, with some venues even needing to hire coaches to bring in audiences. The managers are struggling to cope with programme planning because poor box office takings mean that budgets are limited. At the same time, audiences complain about the high ticket prices. The only mark these halls can probably leave is as “political achievements” in officials’ careers.

However, I do believe that we need world-class cultural and performing arts in our lives, as these experiences can broaden our horizons and bring great pleasure. Do we need theatres and halls? Yes, I believe we do, as they are the best places for us to enjoy great performances. But the prerequisite for building these venues must be that the theatres and halls can actually deliver quality performances and at an affordable ticket price. In order for this to happen, the government has to have long-term plans for support and strategy from the outset. Otherwise we end up with empty giant complexes standing on land where affordable homes could have been built instead.

So whenever officials announce, with great enthusiasm, how wonderful their new world-class theatre/hall is ‒ how it will elevate the city’s cultural status and benefit local people’s cultural lives ‒ I hope they actually know what they are talking about, and remember what their promises once the fanfare dies down.