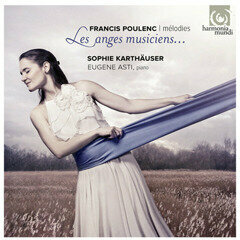 Francis Poulenc’s corpus of songs is one of the most generous and accomplished in the French repertoire. A friend of poets like Apollinaire, Éluard, Aragon, and Louise de Vilmorin, he was constantly alert to their imaginative worlds and their mystery. The voluptuous or nostalgic nonchalance, the gentle melancholy or the impertinent flippancy of his mélodies, which never appear to take themselves seriously, invariably represent the highest art.