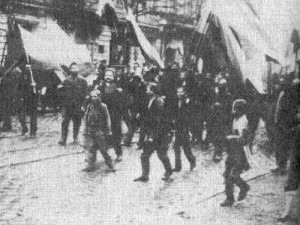 Dmitri Shostakovich (1905-1975) had a hard and troubled career within the political machine that was the Soviet Union. At times the model composer and at others, the reviled modernist, he moved between the extremes of popularity and marginalization. His 11th symphony, written in 1957, was one of his most popular works. It commemorates the Russian Revolution of 1905 and its 50th anniversary in 1955. It was the 1905 revolution that laid the groundwork for the successful revolution of 1917.

The 1905 revolution’s most striking moment occurred when factory workers and intellectuals assembled in a group of 200,000 on 9 January 1905 and marched to the Winter Palace in St. Petersburg to bring a petition to the Tsar. Government troops fired on the crowd, killing 200-1,000 marchers (numbers differ) and sparking unrest across the entire country because of this Bloody Sunday. By 26 October 1905, more than 2 million workers were on strike across the country and even Russia’s rail service was closed down. In 1904 and 1905, Russia was also at war with Japan, and being defeated on land and sea. 1905 was also the year that the various Bolshevik and Menshevik groups started working towards creating what would become the new Soviet state.

Shostakovich’s symphony has often been called film music in search of a film because of its politically charged program. The work opens on a cold frozen January day in front of the Winter Palace. Muted string and harp set up a frozen still scene. The trumpet entrance (01:43) starts to set up the tension that will gradually grow across the movement. Shostakovich adds in two songs of 19th-century political prisoners, which certainly would have been recognized by his audience.

Shostakovich: Symphony No. 11 in G minor, Op.103, ‘The Year 1905’: I. The Palace Square (Adagio) (Berlin Philharmonic Orchestra; Semyon Bychkov, cond.)
The second movement moves to Bloody Sunday itself. The movement gives us the exact day he’s writing about: 9 January, aka, Bloody Sunday. The tension is growing, with agitated strings. The Cossack assault was anticipated, as the marchers moved across the square outside the Winter Palace, but its entrance in this movement is no less horrific. The first section depicts the petitioners, in a kind of frozen calm; the second half, heralded with percussion (10:44), as the troops fire into the oncoming mob. The movement closes with another section of the frozen calm of shock. 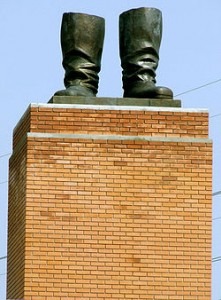 A recreation of the statue of Joseph Stalin, toppled during the Hungarian revolution

Shostakovich: Symphony No. 11 in G minor, Op.103, ‘The Year 1905’: II. The 9th of January (Allegro) (Berlin Philharmonic Orchestra; Semyon Bychkov, cond.)
The third movement is the aftermath: the memorial for the fallen and wounded. Intertwined in this slow movement is a funeral march for revolutionaries, “You Fell as Victims,” again, a melody that would have been recognized by his audience.

Shostakovich: Symphony No. 11 in G minor, Op.103, ‘The Year 1905’: III. In Memoriam (Adagio) (Berlin Philharmonic Orchestra; Semyon Bychkov, cond.)
The last movement has the title in Russian of ‘Nabat’ (in English ‘Tocsin’). A tocsin is a warning bell and the Russian title also refers to a revolution journal published by a Russian exile in Switzerland who advocated violence for the sake of reform. The tocsin sounded at the end of this movement (12:47) is curious: the warning bell holds to a firm G minor while the orchestra holds to an equally firm G major – and in the end, neither wins and the movement closes with a ringing dissonance.

Shostakovich: Symphony No. 11 in G minor, Op.103, ‘The Year 1905’: IV. The Tocsin (Allegro non troppo) (Berlin Philharmonic Orchestra; Semyon Bychkov, cond.)
It’s rare to have a work such as this that not only commemorates a heroic action in the past but also, at the same time, comments on an action in the present. Just as the Cossack’s fired upon the striking workers in 1905, the Russian army suppressed the student then national uprising in Hungary in 1956, quickly and violently. Although sometimes seen as an occasion when Shostakovich bowed down to Soviet pressure in creating a work of memorial, we also see the subversive side to this as it’s applied to the then-current situation within the Soviet bloc of the 1905s.