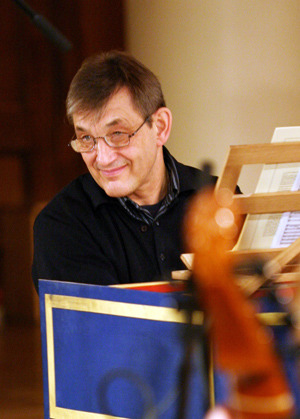 There is an illuminating – if difficult to verify – account that, during the French Revolution, the harpsichords of the Paris Conservatoire were dismantled and used for firewood. Such stories are, sadly, recurring themes in times of instability: proud intellectuals burning their books to stay warm during the siege of Sarajevo form a recent image. However, there is something so symbolic about the burning of the harpsichords during the Revolution: an image of an instrument that was falling out of favour being destroyed in the event that marked the birth of Modernity. Indeed, all throughout that most modern of centuries, the 19th, the harpsichord was overshadowed by the pianoforte (the modern piano) and it was not until the early twentieth century that it began to make a comeback.


Harpsichord playing gained a new impetus in the 1920s, with musicians such as Wanda Landowska, who founded the Ecole de musique ancienne in Paris in 1925, and Arnold Dolmetsch, who started his Early Music Festival at the same year. This revival of the harpsichord was inextricably linked to the so-called Early Music Revival, in which musicians, composers and critics tried to re-create the playing style of earlier times, notably Renaissance and Baroque music. The speed, orchestral balance and sound transparency, not to mention the instruments themselves, sought to create a feeling of authenticity in music. Humorously, when Landowska was criticised by Pablo Casals, another Bach expert, for her playing, she retorted; “you play Bach your way, I’ll play Bach his way”.

By the 1960s and 1970s, the revival was firmly established and a number of gifted musicians had expanded the horizons of Baroque music, and have continued to do so since. Many of them, such as John Elliot Gardner, Simon Rattle or Roger Norrington, are classical music stars today – a status which reflects the degree to which the Early Music movement was successful in shaping our current musical landscape.

Last week, in London, I had the pleasure of listening to one of the main movers and shakers of the Early Music movement, Sir Trevor Pinnock, in a fantastic concert at Wigmore Hall. Pinnock, one of today’s most gifted harpsichordists and conductors, was the founder in 1972 of The English Concert, often hailed as the finest period-performance orchestra in the world. Since 2003, when he left The English Concert, Pinnock has founded other orchestras, as well as played and conducted independently. Last week’s concert featured Pinnock on the harpsichord and a group of his friends (as the lovely bill went) playing the violin, viola, cello, violone and flute.

The programme was a tour of Baroque music, played at its finest: Purcell’s Airs and Dance from The Fairy Queen, Bach’s 5th Brandenburg Concerto, his Orchestral Suite No. 2 in B minor and a series of arias by Handel. The playing was extraordinarily clear and absolutely delightful. The harmony amongst the players was noticeable and the result was excellent. A particular interesting feature was that the concert was preluded by a talk by Sir Nicholas Kenyon, formerly responsible for the BBC Proms and an author of several publications on music. Kenyon gave a very good overview of the Early Music movement and its impact on new performances: it was the perfect introduction to the concert.

Kenyon mentioned in his talk a fear present in certain Early Music circles of falling into a kind of stereotyped museum-version of music. Indeed, there is a danger when playing period music a l’ancienne of becoming kitsch, being listened to solely for historical interest rather than for the music itself – and thereby, once the initial excitement wears off, not being listened to at all. David Munrow, one of the greatest exponents of Early Music in the 1960s and early 1970s, was well aware of this threat and realised that the way to counter it was playing music with as much passion and verve as possible.

Listening to Pinnock play the harpsichord, I suddenly realised what Munrow had meant. Here, in the most complicated and virtuosistic solo passage of the 5th Concerto’s Allegro, when the keyboard sounded as though it had taken flight and dozens of different lines of music are floating around the concert hall, filling the air with fire, I noticed that Pinnock was smiling. Not a discrete smirk, but a wide grin illuminated his face, as though he felt completely alive playing that piece. Later, the ovation he and his friends received confirmed the feeling was spread throughout the audience. That smile reflected the success of the movement, the victory of Bach against kitsch, the affirmation of life through re-discovering history.