While I was in London I attended a concert I would normally have avoided, since half of the programme consisted of Arnold Schoenberg. But I bought a ticket and went in spite of my jet leg because Vladimir Jurowski was conducting a reduced orchestra. For one thing, I find Jurowski very charismatic; for another, I was curious to know what a ‘reduced orchestra’ was and how ‘reduced’ it would be. 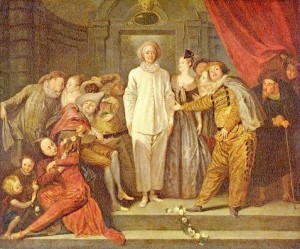 The concert began with Richard Strauss’ Capriccio prelude for the string sextet. It was a charming piece that brought about feelings of joy and wellbeing, which unfortunately did not last. Because then came Schoenberg’s Pierrot Lunaire.

Berliner actress and singer Albertine Zehme, an expert in melodrama, commissioned Schoenberg to compose a score based on Belgian poet Albert Giraud’s Pierrot Lunaire. She specifically requested something between words and music – a kind of ‘speech-song’. Giraud’s poems are moonlit dreams featuring characters from the commedia dell’arte, but the themes explored are dark and sombre, encompassing violence, death, religious heresy and the like.

Schoenberg’s atonal work was composed between March and July 1912. From an initial piano accompaniment, Schoenberg gradually enlarged the piece to include a mixed ensemble of five players: a pianist, a flautist (doubling on the piccolo), a clarinettist (doubling on the bass clarinet), a violinist (doubling on the viola) and a cellist. These five musicians made up the reduced orchestra, and once the performance began, it became immediately obvious why a conductor was necessary. The notes and the harmony (or non-harmony) make it difficult for the performers to synchronise between themselves. To be honest, even if they had not, it is doubtful whether one could have spotted the difference, unless that someone was a Schoenberg fan who knew the complete score off by heart.

When the singing started, I was shocked by the strangeness of the tones. The young Tasmanian soprano Allison Bell is certainly a very talented artist and excelled in her performance, but the music with its high pitches travelling upwards and downwards reminded me of Japanese Noh mixed with a twist of Beijing opera. This strange sortie of unnameable noise invaded my senses. It was, for me, an experience of aggression.

The second part of the concert was again more Schoenberg and Strauss. Even though Strauss’ Four Last Songs are themselves wonderful pieces, my mood was shattered and I found it difficult to concentrate on the music; I just wanted to leave and find some quiet and rest.

I will say this: the experience was interesting. But there will definitely be no repeat performance.