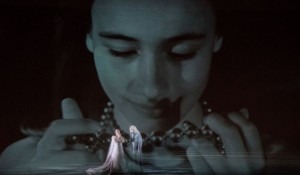 George Bizet’s The Pearl Fishers (Les Pȇcheurs de Perles) is a work of such notorious boredom that is it easy to understand the decision of the Berlin Staatsoper (still in its temporary home in the Schiller Theater) to spice it up with some star power.

They engaged Wim Wenders, one of Germany’s most successful filmmakers, to give his operatic directorial debut, and committed Daniel Barenboim, who quite rarely makes routine operatic appearances, to guide the performance musically.

The plot, set in ancient Ceylon, tells the story of two friends, Zurga and Nadir, who in their youth were both obsessed with the same woman but chose not to pursue her in order to maintain their friendship. Years later they meet again: Zurga now heads the tribe of the Pearl Fishers. Nadir’s life has taken him in different directions as an adventurer. The mysterious priestess Leila shows up for her yearly ritual of protection for the Pearl Fishers, and she turns out to be no other than the woman the two friends had both been in love with. This time, however, Leila and Nadir pursue their romance, and all hell breaks loose. 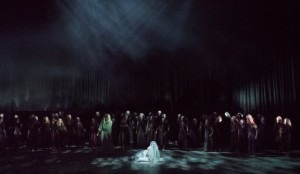 With a story this contrived, it is no surprise the opera is so purposefully neglected. And this production did nothing to make it more appealing. Wenders chose a minimalist stage set (David Regehr) of a sloping beach with the back story projected onto the scrim as flashbacks. The cinematic overlay had all the maturity of a high school theatre project, merely depicting cinematically what was quite clearly being sung. The movements of the four protagonists and chorus were kept to a minimum and remained wooden and schematic. Costumes (Montserrat Casanova) were either grotesquely ugly, such as Nadir’s dirt brown outfit which was redolent of a Judo Gi gone wrong in the laundry. Or confusingly inappropriate, such the Brahma priestess Madonna like outfit in the second act, which she then exchanged for an elegant brown evening gown – perhaps not the most suitable attire for captivity and execution.

But musically this Pearl Fishers succeeded. Olga Peretyako-Mariotti delivered a roof raising performance, putting her bel canto background to good use. She unleashed astounding coloraturas, floating diminuendos, effortless trills and a squillo that stopped you in your tracks. Her middle range was treacle-like and luscious. She was nicely paired with tenor Francesco Demuro as Nadir who delivered some stunning moments, especially in the first act “Je crois entendre encore”, which he sang with daring head notes at the top. His voice, with only a few pinches in the upper register, also harmonized nicely with the main star of the evening, Gyula Orendt’s Zurga. The young Hungarian-Romanian baritone is considered a home grown talent in Berlin, possesses a luscious baritone with tenoral qualities, and an engaging and captivating stage presence. This is a talent worth watching. 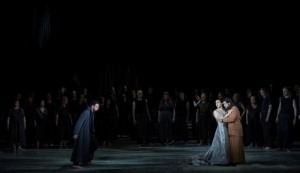 The chorus, beefed up to 85 members sang with limited conviction, not looking entirely comfortable with the odd direction, and clearly capable of doing more than just standing and singing. The Staatskapelle Berlin played enthusiastically for Barenboim, and remains one of the finer opera orchestras.

It is doubtful whether Wim Wenders will be chasing other opera projects. They would be unlikely to achieve the unforgettable status of his movies.