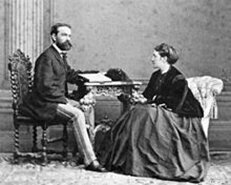 He was the “Wunderkind” from Lichtenstein, and she a poetess of distinction. They got married in 1867, and although the union remained childless, their marriage was a happy one. One might actually consider it the perfect relationship; she supplied the poetry and he set them to music. Joseph Gabriel Rheinberger hailed from the town of Vaduz in Lichtenstein, and he was appointed as organist at a major church at age 7! After musically astonishing his native city with his own compositions, his parents sent him to Munich for further study at age 12. Between 1853 and 1859 he wrote no fewer than 124 youthful works, including three operas and three symphonies. 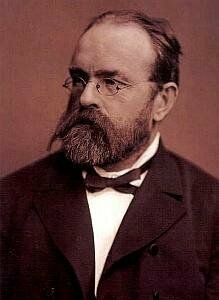 Franziska (Fanny) Romana Ursula von Hoffnaaß, nee Franziska Jägerhuber was born in the Castle Maxlrain, in upper Bavaria. Her family actually owned the castle, and appropriate to her posh social status, Franziska received an excellent education. She spoke several languages, played several instruments, and developed her talent for drawing and painting. In addition, she also wrote poetry and published a widely read travel guide. She married the Lieutenant Ludwig von Hoffnaaß in 1852, and became socially and musically active in Munich’s artistic community. She frequently graced the salons of the city, and it was only a matter of time before she would meet the youthfull Herr Rheinberger. Her name first appears in his letter dated 3 December 1857, “at the soiree of the royal painter von Dürk, Frau von Hoffnaaß sang an aria from Jephta. I have also agreed to give her private lessons in harmony.” He was only 19, and she was 7 years his senior and married, but there was certainly some kind of sweet harmony going on. 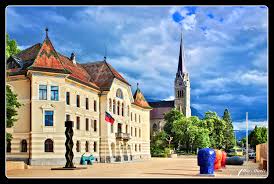 Town of Vaduz in Lichtenstein

He published his first setting of her poetry in 1857, and followed up by dedicating his first song collection Op. 3, to her. Fanny kept two extensive diaries, and on 10 June 1869 she fondly remembers. “I already know Kurt (Joseph) for 12 years. To celebrate our anniversary, we played through the four-hand arrangement of Hasse’s Te deum, the first composition we ever played together.” Things were certainly heating up in 1857, but there were two minor problems. Fanny was still married, and Joseph was still without a job. In 1859 he managed to secure an appointment at the Conservatory teaching piano, and simultaneously he became principle organist at St. Michael. One year later, he was promoted to the head of composition at the Conservatory, and in 1864 he took over as musical director of the “Oratorio Gesellschaft.” At least, Rheinberger now had a small but stable income. The second problem solved itself, as Ludwig von Hoffnaaß died in 1865.

Wedding plans were quickly in the making, and so it came to pass that Joseph married his Franziska in 1867. Utterly devoted to each other, Fanny produced a substantial number of lyrics for his musical settings, and she also advised him in all matters related to his career and work. Fanny was beloved by his entire family, and she eventually became a citizen of Lichtenstein. In 1882 Fanny wrote the libretto for his oratorio Christoforus Op. 120, which was premiered at the Leipzig Gewandhaus to great acclaim. His publisher inquired on 2 April 1885 if Rheinberger would compose some shorter pieces for the organ. Fanny wrote in her diary, “An hour later he was already sitting there at the writing desk to produce an organ sketch. It’s terrible! Easter Sunday! But the organ is his love.” 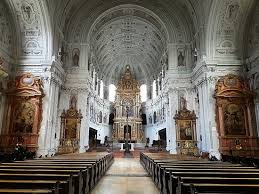 In 1889 Rheinberger started a Christmas setting of her poetry cycle “The Star of Bethlehem.” However, Fanny died before he was able to complete the work. Overcome with grief, Rheinberger never attended any of the numerous performances of their joint work. He later said, “The real nerve of music is the longing for happiness that always recedes before us.”