By the early 1970s, Aaron Copland stopped composing. As he wrote, “It was exactly as if someone had simply turned off a faucet.” He felt lucky to have been given so long to be creative, and was resigned to the “fact that it appears to be over.” He still made frequent appearances as a guest conductor in the United States and the United Kingdom, and he made a series of recordings of his music for Columbia Records. 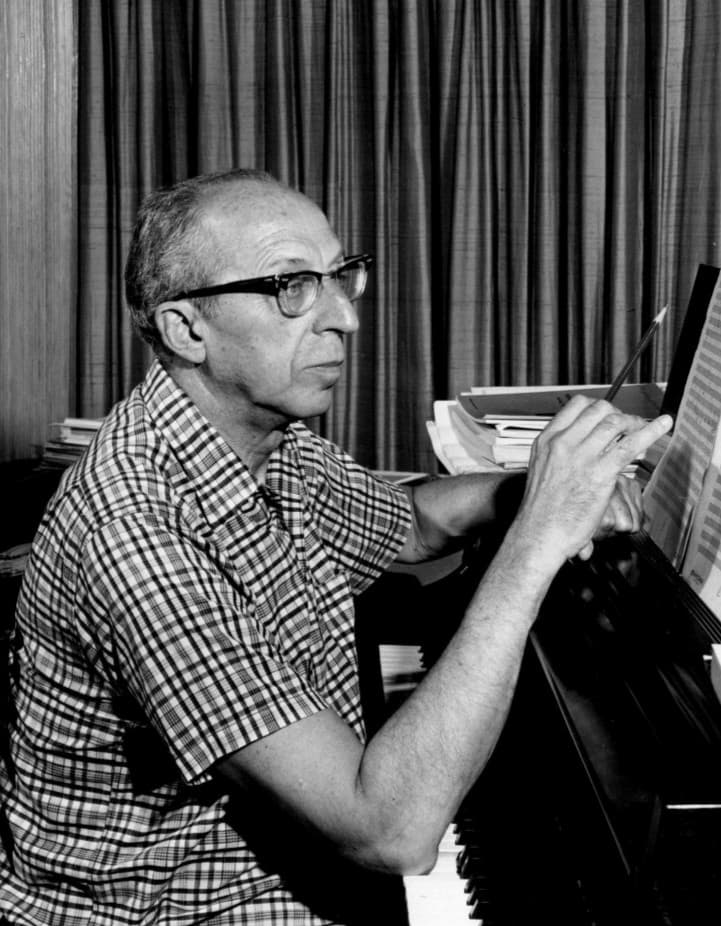 Aaron Copland composing at the piano, 1962

Copland began to experience short-term memory lapses, and by the mid-1980s was under regular medical supervision. Copland died a few weeks after his 90th birthday on 2 December 1990 in North Tarrytown, New York, of Alzheimer’s and respiratory failure brought on by pneumonia. His ashes were scattered over the Tanglewood Music Center near Lenox, Massachusetts, and his estate was “bequeathed to the establishment of the Aaron Copland Fund for Music, a non-profit organization for the support of contemporary music and young composers.”

Aaron Copland was a central figure in the American musical and cultural landscape, and he was universally admired. “But far more significant,” as a scholar wrote, “is the widespread notion that he wrote music that has come to exemplify the modern American spirit and landscape. Copland helped to define, if not create, the resounding clichés of America with which he is credited.” And while he represents the dominant American legacy from the twentieth century, he was a figure in whom all in American musical life could find some grounds for admiration. 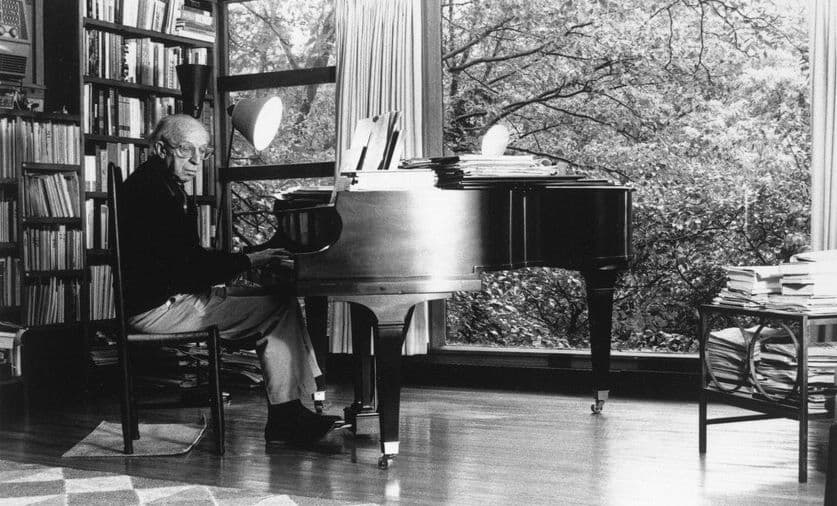 A scholar writes, “He defied the popular image of the self-consciously serious artist as eccentric, arcane, inaccessible, or rebellious. His self-presentation was one of middle-class modesty, frugality, absence of resentment, and generosity.” In fact, he assumed the role of a gentle senior figure and was “a peacemaker in a highly contentious aesthetic environment in which avant-garde modernists, conservatives, and experimentalists all seemed inclined to controversy.” But what is more, he communicated to the public not only through his music but also as a writer of music. And let us not forget that he taught and mentored a wide and diverse set of aspiring composers.

Copland’s legacy is probably most widely felt in the influence he exerted on subsequent generations of composers. His instinct for simplicity, formal clarity and accessibility clearly echoed in postmodernity and in neo-Romanticism. As a scholar writes, “the synthesis in Copland’s music of accessible surface qualities, uncanny sensitive eclecticism, and openness to disparate styles and genres resisted all doctrines and catechisms.” 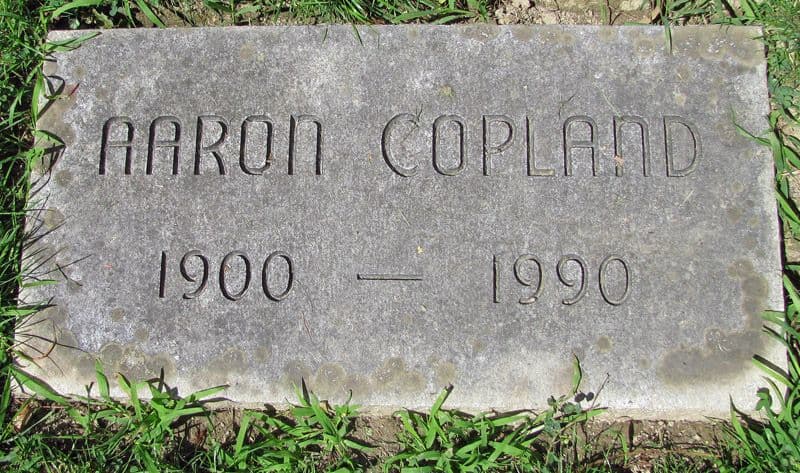 Copland’s narrative arc is articulated by a sustained musical line that “justifies form and lends structure to musical logic.” His music remained a defining part of contemporary Americanisms, and his musical rhetoric has become iconic. “His music has helped generate a sense, or perhaps illusion, of historical and cultural unity and consistency.” Copland’s music essentially functioned as a mirror of America, as it bridged the gap between concert classical music and popular music. He helped to create a sense of the modern American spirit, and the notion that “he played a central role in the shaping of the national cultural consciousness makes him uniquely interesting, not just for historians but also for the musician.”

Aaron Copland “had perhaps the most distinctive and identifiable musical voice produced by this country so far, an individuality that helped define for many what American concert music sounds like at its most characteristic.” Audiences and composers could find common grounds in one or the other of Copland’s roughly 100 compositions. In the 1920s he engaged with the melodic, harmonic and rhythmic elements of jazz, and progressed to use folk and popular song and dance materials in the 1930s. 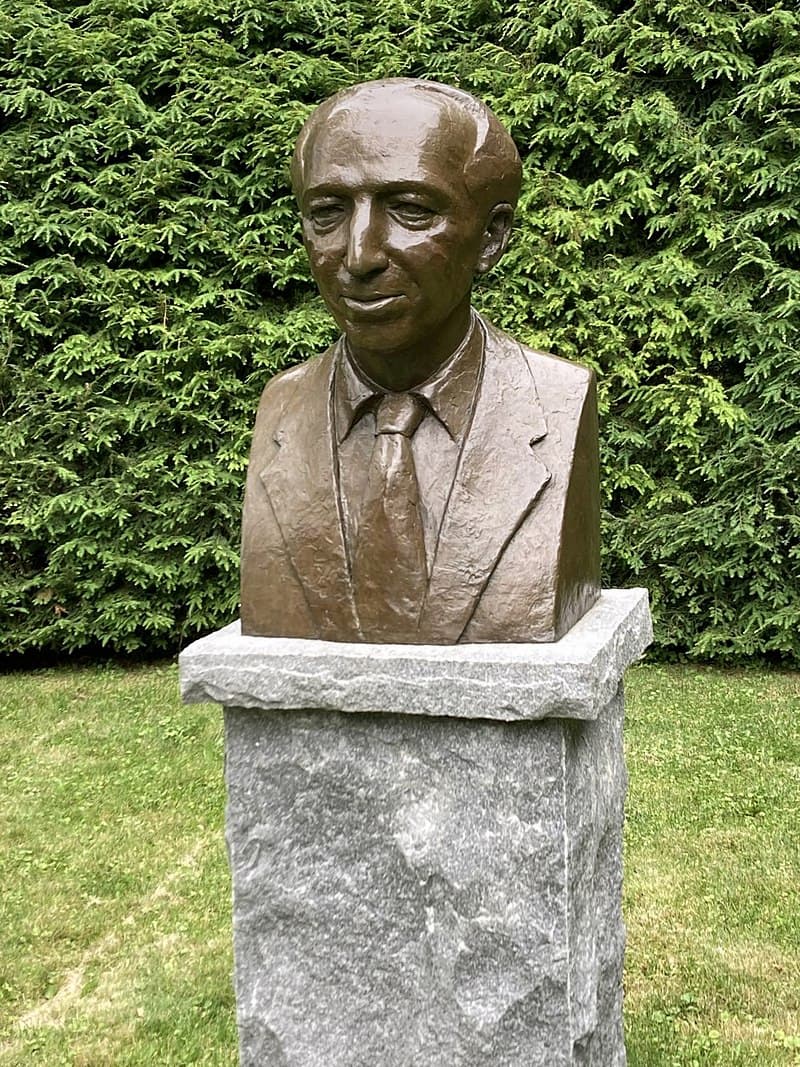 Sculpture of Aaron Copland in Tanglewood

In order to challenge his abilities as a composer as well as expand his reputation and audience for his more serious works, Copland turned to Hollywood and in his film scores established “the most distinguished populist musical style yet created in America.” He also turned to serialism as a method, but even his late pieces “betrayed audibly and unmistakably the consistent, distinctive hallmarks of Copland’s musical rhetoric.” As Copland himself pointed out, “the main character of my music is the optimistic tone, a love for rather large canvases, and a certain directness in expression of sentiment.”