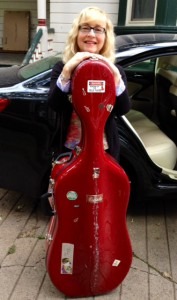 I would be wealthy if I had a quarter for every time someone said, “that’s bigger than you are!” Dragging my cello around on buses, thrusting it under turnstiles, hoisting it onto airplane seats, taking it into stores—always brings on all kinds of derisive comments. “Why didn’t you play the flute?” or “What do you have in there a dead body?”

We cellists—although we make the most gorgeous sounds that are the closest timbre to the human voice—pay dearly for playing it. Traveling with and performing the cello, results in unexpected adventures and material for great story telling. The constantly changing airport rules make us nervous travelers. Sometimes I’m asked every few minutes all the way to boarding time, “Madam do you have a seat for that thing?” “It doesn’t eat much,” I reply.

One year I broke my ankle as if it isn’t hard enough already to maneuver a cello. Getting to the dressing room backstage on crutches with a cello was quite a challenge. Someone had to be called to help me get my instrument from the loading dock into the building. Negotiating a long flight of stairs to the stage level in my long black dress was out of the question. The stage manager had to engage the freight elevator to take me down the stairs. The backstage elevator had to be large enough for a concert grand piano and the construction was odd— the doors didn’t close the way elevator doors normally do. Two huge double doors had to be tugged by thick straps to the center to close it. Then the stage manager had to carry my cello to the opposite side along a long hallway where a colleague already dressed in their tails was recruited to take the cello out of the case and onto the stage for me. I tried not to knock anything over as I made my way on crutches to the first stand, painstakingly, noiselessly putting my crutches down by my feet but they were anything but unobtrusive. Someone from the audience came by, smacked me on the casted leg and said, “What d’ you do—kick your boyfriend?” 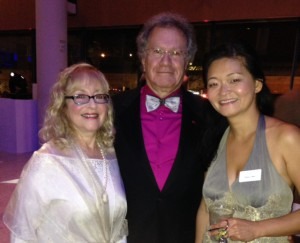 Howard in the crimson shirt, with Janet and a cello colleague.

One of the more memorable comments after the Brahms Piano Quartet No.1, the fourth movement is a Rondo Alla Zinfarese, one of the great chamber music pieces of all time, was “Your performance made my nipples get hard.”

We musicians go through the milestones of life just like everybody else. When we do, it is so public! I remember playing principal cello for a subscription week when I was eight months pregnant. I had an exposed solo in Sir Edward Elgar’s Enigma Variations. I was nervous. It’s a tour-de-force piece under any circumstance and I could barely get my arms around the cello with my large stomach. Fortunately it went quite well. I was a little embarrassed to stand to take a bow when the conductor indicated I should do so, but when I overheard an audience member say, “Wow she’s about to pop! That would be enough to make anyone’s water break,” I sat down quickly turning several bright shades of pink.

When we have solo performances we take great care in choosing a dress that is comfortable to play in and yet visually dramatic for the audience. Salespeople are always astonished when I sit down and spread my legs to see if the skirt is wide enough to play the cello. “You see…I’m a cellist…” I stutter. Then I roll my shoulders and lift my arms and mime playing to make certain I have freedom of arm movement. When the dress takes precedence over the playing in the review of the performance though, we are not pleased. Woman artists are equally thrilled to hear, “Your dress was kind of drab from a distance, but you did play well…” 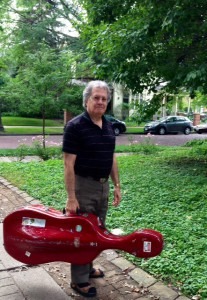 And we really appreciate when someone says after a program, “you blocked the view of the pretty page turner!”

My husband Howard gets lots of attention too. One night at a concert conducted by our music director Osmo Vänskä, my husband was standing alone in the lobby looking dapper in his crimson shirt, silver bow tie and tuxedo waiting for the performance to begin. A man came up to him and said, “Can I shake your hand?” Howard was puzzled but he proffered his hand. The man then gushed, “Mr. Vansck I really enjoy your work!”

Another evening a woman noticed Howard in the audience and said to him, “you have the best looking shirt in the whole auditorium.” He replied, “See that pretty woman up on stage? That’s my wife in the front of the cello section.”

My husband frequently carries my cello for me up and down the stairs, in and out of the hall, the parking garage and our house. Don’t feel too sorry for him. Howard loves it when people say to him, “thanks for the concert and thanks for your wonderful playing,” as I straggle behind.