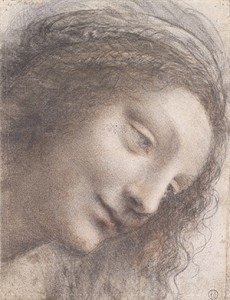 The Catholic prayer called either Ave Maria or the Hail Mary has been a familiar setting in music, coming into favour in the Renaissance and extending to the current day. Mary, the mother of Jesus, holds a particularly beloved place in the Catholic liturgy and it is in the Ave Maria prayer that composers from Palestrina to Stravinsky have found inspiration.

The prayer asks Mary to intercede for the supplicant. What’s curious about the English version is that it is still said today using the old-fashioned words “thee,” “thy,” and “thou.”

Hail Mary, full of grace,
the Lord is with thee;
blessed art thou amongst women,
and blessed is the fruit of thy womb, Jesus.
Holy Mary, Mother of God,
pray for us sinners,
now and at the hour of our death. Amen.

Going back in time to more traditional settings,

Josquin wrote a two-part sacred piece combining two prayers: the Pater Noster (Our Father) and the Ave Maria, as one of the last works before his death. When he willed his property to the local church, he specified that this work was to be sung in all processions in front of his house.

As part of Josquin’s late style, the texture is very dense, with much imitation between the voices, and yet, creates something that is a sung prayer “in its most ideal sense.”

Josquin: Ave Maria (Dufay Ensemble, Eckehard Kiem, cond.)
A hundred years later, when Palestrina takes up the text, the emphasis is on clarity of line and counterpoint. After the initial chant opening, the choir’s entrance is measured and slow, with the interest in the upper line. Soon, however, the other voices begin to move, each adding their own motion to the line.

Palestrina: Ave Maria (Choir of Clare College, Cambridge; Timothy Brown, cond.)
His contemporary, Orlando di Lasso, in his Ave Maria setting, starts without the chant beginning, but again the emphasis is on the individual vocal lines.

Lasso: Ave Maria (Hannover Orlando di Lasso Ensemble, Detlef Bratschke, cond.)
Moving some centuries ahead, Mozart, in a late setting, writes a 4-voice canon solely on the words “Ave Maria.” Mozart discovered the music of J.S. Bach late in his career and it’s a testament to his devotion to the lessons he was learning from studying Bach that he attempted this canon, a genre considered to be one of the tests for writing for separate voices and then combining them together.

Mozart: Ave Maria, K. 554 (Chamber Choir of Europe, Nicol Matt, cond.)
One of the most beautiful settings occurs in Verdi’s Otello, where, at the beginning of the final Act, Desdemona prepares for bed. After singing the Willow Song, Desdemona prays, singing the Ave Maria, and falls asleep, only to be awakened by the jealous Otello and confronted with the falsified evidence of her infidelity and then strangled. This is her last moment of peace in the opera and it becomes a still point in the scene.

Verdi: Otello: Act IV: Ave Maria (Renata Scotto; National Philharmonic Orchestra; James Levine, cond.)
Among the most famous settings of the prayer is a mid-nineteenth-century setting by Gounod, where he takes the first prelude from Bach’s Well-Tempered Clavier and puts words to it, singing above the accompanying line. The jazz singer Bobby McFerrin works with an audience to do a completely vocal performance of the work:

It has become rarer in the 20th century to hear Ave Maria settings, but one was done by Stravinsky, to a text in Slavonic, not Latin. Written for performance in the Russian Orthodox Church, which does not allow the use of instruments, this is a vocal-only setting.

Stravinsky: Ave Maria (Gregg Smith Singers; Robert Craft, cond.)
It’s interesting to see how each century takes up the prayer in different ways. In the Renaissance, it was all about the individual voices whereas later, it’s about the beauty of the text itself. Many, many other pieces were written in praise of the Virgin Mary, but this is one of the most fundamental.