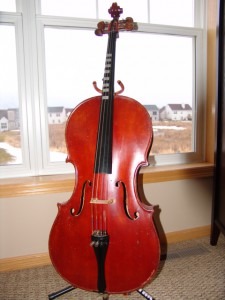 Musicians are fallible. Most of the time we attain near perfection in our performances only to be foiled by very human blunders. Recently, we have heard of musicians leaving their precious instruments on trains and in taxicabs. Both cellists Yo Yo Ma and Lynn Harrell have done that.

The story that captured our hearts was that of the principal cello of the Los Angeles Philharmonic, Peter Stumph. After a concert, he had set his precious Stradivarius cello down to pull out his house keys. He opened the door and absent-mindedly left the instrument on his front porch. A security video filmed a thief racing away on his bicycle, the cello in hand. The video picked up the sound of a clattering encounter with some garbage cans. The thief left the cello leaning against a dumpster. He evidently had no idea what he had found.

Later, Melanie Stevens a 29-year-old nurse saw the cello in its hard case among the trashcans. She took it home. She showed it to her boyfriend, a cabinetmaker who thought he could make the cello into an attractive compact disc case. She had no idea that the L.A. Phil was missing the instrument until ten days later when she heard a television report. Fortunately, the cello sustained only minor damage from the trash can crash and was reunited with it’s mortified owner. The Antonio Stradivari instrument, built in the Cremona, Italy, in 1684, is one of only 60 cellos made by Stradivari. It is insured for $3.5 million.

In 1980 I made my B.B.C. radio recital debut. My pianist and I were lucky enough to get the studio the day before to rehearse. We hopped into a big black London cab. The friendly redheaded driver had a charming cockney accent. A cello is always a conversation piece.

We arrived at the venerable building, a bit cowed by the edifice, paid the driver and went inside. Before we had even signed the register for visitors Arthur, my pianist, realized in horror that he had left his briefcase in the cab. Not only was all of his music in there, so were his passport and airline ticket. Art raced out the door to hail another cab. “Canadian Embassy on the double” he shouted.

Left alone, I started searching the B.B.C. library. I hoped that they would have the music. Beethoven Seven Variations on a theme from Mozart’s opera Magic Flute would not be a problem I thought, but it would be unlikely that they would have the infrequently performed Hindemith Sonata op.11 no. 3, which was the work that had captured the producer’s interest. To my utter surprise, the Ritual Fire Dance of Manuel de Falla turned out to be the one piece that they didn’t have. I started calling cellists. Surely someone from the many orchestras in London would have the piece. I called music stores. No one seemed to have the music! My heart sank. Just as I was beginning to despair, the guard at the entry desk called me to come down to the front door. “What could this be?” I thought. As the elevator door opened I saw a familiar mop of red hair. The taxi driver had noticed that a briefcase was left in the back of his cab. He saw some music. Because of the cello and our conversation, he remembered us. The cabbie drove all the way across London to return Arthur’s briefcase. I was so grateful. I tried to pay him for his time and energy but our cockney friend refused any remuneration. Arthur eventually showed up looking quite sheepish. It was not the first nor the last time he lost the music. Now I always carry an extra copy of all the piano parts.

Musicians can be derailed by even the slightest mishap – a flutist can’t play with a canker sore and a string player is handicapped by a cut on a left hand fingertip. Who would imagine that an afternoon of sledding could jeopardize a concert? During December the orchestra performs Handel’s Messiah. One of the concerts takes place at our magnificent Saint Paul Cathedral. It is always a packed event. When I walked into the enormous church that evening I could hear The Trumpet Shall Sound. I assumed that our principal trumpet was warming up for the challenging and famous piccolo trumpet movement. As I got closer I saw that it was not Manny Laureano but someone I’d never seen before. “Oh no,” I thought “Is Manny out?” I soon heard the story that was circulating. Manny had gone sledding with his young son that day. The boy was sitting in front of Manny between his legs. The toboggan zigged and they zagged and before Manny knew it, his son’s head walloped him in the mouth!

As we took our seats for the performance our principal oboe started a conversation with the tall stranger playing the trumpet. She asked if he was flown in from out of town. The trumpet player said no. Puzzled, she asked him where he plays, since she hadn’t recognized him as one of our regular substitute musicians. “ Oh” he said,“ I’m not a freelancer. I’m Manny’s dentist.” And with that he nailed the solo like a pro.