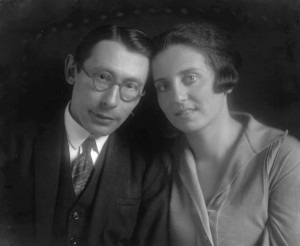 An ancient proverb says, “a successful marriage requires falling in love many times, always with the same person.” And that is exactly what happened to Hans Gál and Hanna Schick. They were married for 65 years, and their devotion, dedication, quiet strength and love of music allowed them to blossom as a couple in the face of the most wretched political and personal tragedies. Hans—we celebrate the 125th anniversary of his birth in 2015—was an up-and-coming Viennese pianist, musicologist and composer. Hanna, on the other hand, had grown up in an affluent household in Prague before the family moved to Vienna in 1908. The couple met entirely by circumstance at the Schick household. Hanna had already been aware of Gál’s music, without actually knowing him personally, and she later recalled, “When this pianist asked me what sort of chamber music I would like to hear I said, among other things, the Piano Quartet by Hans Gál. On that occasion he played cello. Six weeks later we were engaged.”

Hanna’s mother was not entirely thrilled to see her daughter engaged to a man twelve years her senior. Apparently, she sent samples of Gál’s handwriting to a famous graphologist, who advised against the union. In the opinion of the graphologist, Hans was “too egotistical.” Hanna eventually conceded that this was an accurate assessment, but “what he naturally couldn’t see was that this egotism was not a crude material one, but served only his creative work, for which, often quite ruthlessly, he had to fight for time and freedom. But my mother was very worried, and was fully expecting that our marriage would not last long.” Overcoming the skepticism of the graphologist and of Hanna’s mother, the couple married in 1922. Their first married year proved to be a time of devastating political and economic hardship. Gál’s position at the University was underpaid—frequently he did not get paid at all—and Hanna studied speech therapy to
supplement the meager family income. 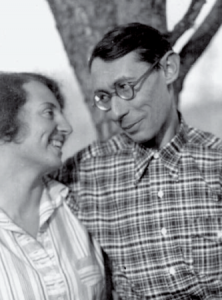 Professionally and personally, the year 1923 proved to be a deliriously happy period for the couple. For one, it saw the birth of their first son Franz, and Gál’s comic opera Die heilige Ente (The Sacred Duck) became a resounding success in European opera houses. Their second son Peter was born in 1924, and Gál was called upon to work on the complete edition of the works of Johannes Brahms. Professional successes none withstanding, daily life was still a struggle. This all changed when Gál was appointed as Director of the Conservatory in Mainz, a position he took up on 3 December 1929. For a period of four years, the Gál family enjoyed a stable financial environment, but when Adolf Hitler seized power in 1933, Hans was denounced by the local press with the spiteful words “Away with the Jew Gál,” and suspended with immediate effect. Even more devastatingly, all performances and publications of his works were forbidden in Germany, and the family was forced to return to Vienna. Yet it was almost immediately clear that the family could not remain in Vienna either. They began to organize their escape through Switzerland in March 1938, with Hanna departing for London first, followed by Hans and eventually the two boys.

Once in London, the family once again struggled to make ends meet, with Hanna managing to find temporary work as a speech therapist, and Hans being invited by the distinguished musician and scholar Sir Donald Tovey to the University of Edinburgh to catalogue the library of the Music Faculty. All this proofed to be short-lived, as the outbreak of World War II saw Hans labeled as an “Enemy Alien.” Worried about a possible German invasion, Churchill famously decreed that the “entire alien lot had to be collared,” including Jewish refugees. Hans was quickly arrested and imprisoned in an internment camp. Hans kept a meticulous diary during this trying period, entitled “Music Behind Barbed-Wire.” By September 1940, Gál was released and returned to Edinburgh to join his family. Without employment, accommodations or a regular source of income, life seemed entirely hopeless. Their youngest son Peter was unable to cope with the situation, and tragically took his own life. In 1944, Hanna gave birth to a daughter Eva, and by the end of the war things improved markedly. Hans finally obtained a permanent teaching post at the University of Edinburgh, and remained active at that university well beyond retirement age. Hans Gál died 3 October 1987, at the age of 97, and Hanna peacefully followed her husband in December 1989. Music and love conquers all!