When art becomes distortion, we think of the 20th century as the time and place for this to become an art form. The British artist Francis Bacon (1909-1992) was a figurative painter who created bold images against isolated backgrounds. In the 1950s, Bacon used the mid-seventeenth-century Spanish painter Diego Velázquez’s portrait of Pope Innocent X as the basis for nearly 50 studies in his own style.

Velázquez was traveling to Italy in 1650 and painted the picture of the pope after he had already painted other people from the papal court with great success. The portrait has never been outside the pope’s family and during much of the 17th and 18th century was regarded as a hidden masterpiece. It is considered Velázquez’ great portrait and, in fact, one of the finest portraits every produced. It captures the essence of a vibrant powerful man and when Innocent X saw the finished work, he is supposed to have said “Troppo vero!” (“All too true!”).

In the 1950s, Francis Bacon took on the Velázquez picture as the basis for a series of more than 45 variants on the original. He was fascinated with the color scheme and used the elements of the background curtains, his distinctive over-cape, and the long white robe in his own work. Bacon said that he portrayed the pope again and again “an excuse to use these colours, and you can’t give ordinary clothes that purple colour without getting into a sort of false fauve manner.”

Bacon takes Velázquez’ rather cautiously self-satisfied pope and turns him into a ghoulish figure, mouth open in a never-ending scream, seeming to grip his throne as another kind of physical representation of the scream. Yet, his face recedes into the background, overpainted by the drapes and hidden in the dark colors. 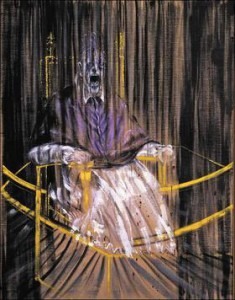 The British composer Mark-Anthony Turnage went to an exhibition of Bacon’s paintings at the Tate Gallery in 1985 and saw three of the Screaming Pope pictures at the time (Pope I, Pope II, Study after Velasquez’s Portrait of Pope Innocent X). In 1988-89, he wrote 3 Screaming Popes. His idea was to do with Spanish music what Bacon had done with the work of the Spanish painter. He said: “… my initial idea was to write a piece which distorted a set of Spanish dances as Bacon had distorted and restated the Velasquez. In the process of writing the piece, the dances (like a first layer of paint, or an outline) became so submerged in the other textures of the piece that only a faint trace is visible – just a hint of a tango here and there. What I hope comes across is the coloristic intensity and emotional immediacy of the paintings.”

Turnage: 3 Screaming Popes (City of Birmingham Symphony Orchestra; Simon Rattle, cond.)
The work starts out as though it were directly putting Bacon’s work into sound: edgy shrieks, drawn-out climaxes, quick silences. Then, as you listen closer, you start to hear the Spanish elements in the music and hear how Turnage puts his own distortion field on something might be otherwise familiar.

Turnage, who was awarded a CBE in the 2015 Queen’s Birthday honours, is one of the most widely-performed composers of today and in this work we can understand how the strong imagery of Bacon were so influential in creating an equally strong modern work.