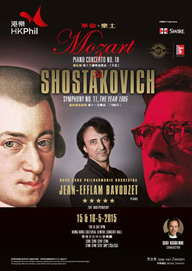 On 15th May, The Hong Kong Philharmonic Orchestra performed Mozart Piano Concerto No.18, with pianist Jean-Efflam Bavouzet and Shostakovich Symphony No.11, The Year 1905 conducted by Case Scaglione.

Mozart’s Concerto started with gentle orchestration and a heavenly theme. However, the entry of piano was unsmooth and forceful. Though technically faultless, his playing lacked the unique light touch for Mozart’s music. Bavouzet also failed to produce a highly nuanced range of sounds. Yet, Bavouzet’s execution was neat due to his well-judged pedaling. The coordination between the soloist and the orchestra was fine, and the interplay of the instruments was meticulous, which showed that Scaglione had paid attention to the details of the orchestral parts.

In the searing second movement, Bavouzet’s playing lacked originality and exquisite sensitivity. The tone production could be more refined. Compared to Uchida’s recording, Bavouzet’s interpretation was in eclipse as it was charmless and heartless. Nevertheless, there was still the haze of melancholy and pensiveness.

The third movement was comparatively persuasive, despite the slightly hurried tempo and stiff articulation. The animated finale was delivered with high spirits and the flow was fluent. After the horn fanfares, the piano entered and the music transformed into the jocund finale.

Bavouzet played with incredible technical facility, but he could widen the dynamic range throughout the Concerto to evoke the operatic character in Mozart’s Piano Concertos. Bavouzet played Massenet’s Toccata as an encore and displayed his virtuosity and a sense of improvisation.

After the intermission, here came Shostakovich Symphony No.11, The Year 1905, which was in stark contrast to Mozart Piano Concerto, Paradis, since this symphony reflected the Russian Revolution in 1905.

The first movement, The Palace Square, had a subdued texture from the orchestra. The orchestra successfully conveyed the desolate vastness with great mourns. The opening was extremely pathetic and bleak, which fully portrayed the frostiness and hardship that Russians suffered from. The forward momentum was never lost while maintaining the misty tension.

In the second movement, The Ninth of January, calmness was interrupted by the agitated lower strings. Scaglione trudged towards the climax, which was probably the most terrifying music Shostakovich had written. The tormenting unisons and ferocious percussion by HKPhil reflected the horror as the workers lost their lives. It was so moving that the audience could feel the frustration and fury.

The third movement, In Memoriam, lamented over the lost lives in the incident. The pain and beauty was effectively conveyed by the strings. The way Scaglione built up the climax was particularly intelligent and tugged at the audience’s heartstrings.

The finale, The Tocsin, was tempestuous. Unleashing the astounding violence, the orchestra had a wide palette of tone colours and sufficient dynamic contrast. The brass section executed this demanding part with power. The coordination between the orchestra and the bells was scrupulous. The intended effect of having the orchestra producing G major chords while the bell insisting on G minor was clearly shown, as the melodies of the orchestra suggested triumph, while the bells created a certain lament. Finally, the reverb of the bell ended this brooding symphony.

To conclude, this concert was fascinating, which was also reflected in the audience’s exuberant applause. Although the performance by Bavouzet was a bit disappointing, Scaglione’s musicianship could be observed in his insightful interpretation of Shostakovich’s Symphony No.11 from the well-balanced texture and dynamics. HKPhil’s outstanding performance also deserved compliments. Indeed, Scaglione had a lot to say in his music. As a young firebrand conductor, Scaglione will definitely mature and continue to give penetrating performances with individuality.

Anson is a Secondary 3 student from St. Paul’s Co-educational College, he is passionate about music, in particular piano.