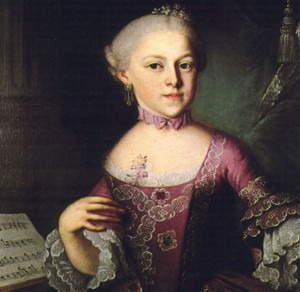 Mozart’s father Leopold early on realized that his son Wolfgang, to whom he referred as the “miracle of God permitted to have been born in Salzburg,” represented a unique talent and opportunity. In order to raise money and to spread the fame of the child prodigy, Leopold virtually abandoned his own career and busily visited the courts and musical centers of Western Europe. Towards the end of April 1764, the Mozart’s arrived in London — coming from an initial visit to France — and would eventually stay until 30 July 1765. Wolfi gave his first performance at Ranelagh Gardens — located between the Embankment and Chelsea Bridge Road — in June 1764. In the center of the garden stood a large wooden Rotunda and the prodigy performed harpsichord and organ compositions at a benefit for a newly established maternity hospital. We don’t know what compositions he performed, but by 5 August the family had moved into a large country house. His sister Nannerl, who was 13 at that time, recalled Wolfi’s first attempt at symphonic composition: “On 5th of August we had to rent a country house in Chelsea, so that father could recover from a dangerous throat ailment, which brought him to death’s door. We were forbidden to touch the keyboard. And so, in order to occupy himself, Wolfgang composed his first symphony with all the instruments of the orchestra, especially trumpets and kettledrums. While he composed and I copied he said to me, “Remind me to give the horn something worthwhile to do.” Soon after, notices appeared in London newspapers that “Miss Mozart of Twelve, and Master Mozart of Eight years of Age, Prodigies of Nature” were giving a concert of vocal and instrumental music. Leopold, who misrepresented his children’s age, wrote to his friend Hagenauer, that the concert would probably bring me at least one hundred and fifty guineas.” Among the compositions performed that evening, was Wolfi’s first effort in the symphonic genre, the 3-movement E-flat major Symphony, K. 16.

During Wolfie’s time in London, the most famous resident composer in the British capital was Johann Christian Bach. The eleventh and youngest son of Johann Sebastian Bach and Anna Magdalena Bach spent much of his formative years in Italy, where he studied with Padre Martini in Bologna. In 1762, Bach traveled to London to perform three of his operas, and he eventually became music master to Queen Charlotte.

For most of his London career, King George III and Queen Charlotte gainfully employed Johann Christian Bach. As such, he had relatively free access to Queen’s House, better known today as Buckingham Palace. His primary duty was to compose music that could be performed by members of the royal household. Composing in a highly melodic style that favored balanced phrases and held back on contrapuntal complexity, John Bach — as he was colloquially known — wrote a number of Keyboards Sonatas with Violin accompaniment. 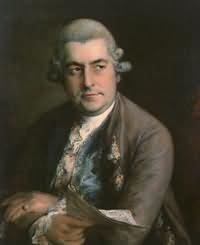 During their time in London, the Mozart family performed three times at Queens House. We do know that both the king and queen were present, since Leopold reports to his wife, “the graciousness with which their Majesties received us cannot be described… their easy manner and friendly ways made us forget that they were the King and Queen of England.” Leopold was of course always eager to upstage the resident composers and to demonstrate the musical genius of his son. In London, he went ahead and published Wolfgang’s “Six Sonatas for Harpsichord and Violin”. Since Leopold was a celebrated violinist and pedagogue, he undoubtedly helped along some of his son’s violin compositions. Of course, Leopold was also a shrewd businessman, so it comes as no surprise that the compositions are dedicated to Queen Caroline.

Perhaps J.C. Bach’s music for piano and orchestra exerted the most important influence on the young Mozart, and we will hear and examine some of these compositions in our next episode.