Interdisciplinary studies have had a long tradition in music. Examples range from operas and ballets, to instrumental pieces based on a borrowed theme (e.g. Liszt’s La Campanella), to musical ideas derived from another subject (e.g. Second Viennese School’s serialism). Many important developments in music in the 20th century have also benefited from exchanges between music and other media of arts such as painting, literature, and movies. In this article, I would like to talk about a concert I went to a few weeks ago themed as ‘Mozart Ellington’ at the Grand Theatre in Aix-en-Provence. 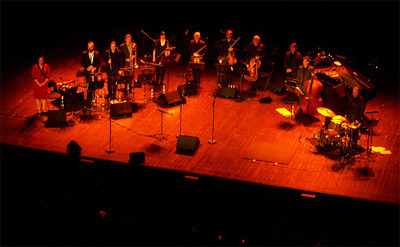 The Grand Theatre was only recently built in 2007 and adopted an architectural style that combined the classic and the modern. The structure of the building is modern, with sandstone faces and huge glass walls, giving it a Mediterranean feel with a slight Art Deco twist; and the exterior is composed of curved surfaces, emitting a feeling of unending waves. The main theatre’s basic layout is very similar to that of an Italian opera house, with a performance platform in the front, a large stall low in the middle, and three vertical levels of open box seats in the shape of a horseshoe on the sides. The interior is simple and elegant, marked by the uniform use of red textile (seats and carpets), natural panels (wood), and white ceilings and columns.

For the concert programme, it was split (and interspersed) roughly half-and-half between Mozart, the genius of classical music who I am sure needs no introduction, and Ellington, who, many would also recognise, was a prominent American composer in the 20th century and was particularly known through his orchestral and big band compositions, and often credited for bringing jazz into concert halls. Recognisable pieces in the programme included excerpts from the Magic Flute and the beautiful clarinette quintet by Mozart, and Ellington’s C Jam Blues. It also featured one piece written by Raphaël Imbert, the main player of the concert.

The performance of the evening brought two different music groups together: Compagnie Nine Spirit, a jazz group formed in 1999 led by Raphaël Imbert, a local of Aix-en-Provence, and Quatuor Manfred, a more classically oriented string quartet formed in 1986. There were also a couple of guest performers, including Florent Héau, a delightful clarinettist, and Simon Sieger, a local student. The programme interwove Mozart and Ellington’s compositions—some linked together by a transition, some presented separately. And it was not all just about instrumental music. There were also singing, chanting, dancing, and designed stage lighting.

The idea of mixing Mozart and Ellington in a concert is an interesting concept and certainly attracted lovers of classical music and of jazz and blues to experience something they might not typically choose to listen. Personally I was slightly disappointed by the fusion of the two performing groups because they seemed to lack the chemistry and spark. The Campagnie Nine Spirit seemed more at home in jazz than in Mozart (although, admittedly, Mozart’s music has troubled many a great musician), whereas the Quatuor Manfred struggled a little with the unaccustomed freedom to improvise. And perhaps because of the amalgamation, it took some time before the audience warmed up. Typically in jazz performances, the audience would give a round of applause after a solo cadenza even if it is in the middle of a piece. The audience of the evening was shying from this practice for the first half of the performance until a slowly growing number of people who were used to this tradition brought the audience over the critical mass.

It was interesting to observe that the Quatuor Manfred chose a performance practice more in-line with Mozart’s days, which involved very little vibrato, to mix with jazz and used amplifiers. If Mozart had known that his music would be performed in this way, I wonder whether he would have loved it or loathed it more than he would Vanessa-Mae’s techno performance of his symphonies. Anyhow, given that amplifiers were used, the sound management could have been executed better such that the different instruments would be more balanced.

If I could borrow a term often used in sports, my pick of the ‘most valuable player’ of the evening was no doubt Florent Héau, the guest clarinettist who demonstrated a remarkable interdisciplinary ability. He conducted, performed excellently on the clarinet in both jazz and in Mozart, played intriguingly enchanting music from a saw, tap danced, and sang. He also had a very friendly and lively demeanour which radiated from the stage, and rightly deserved the most enthusiastic round of applause from the audience.