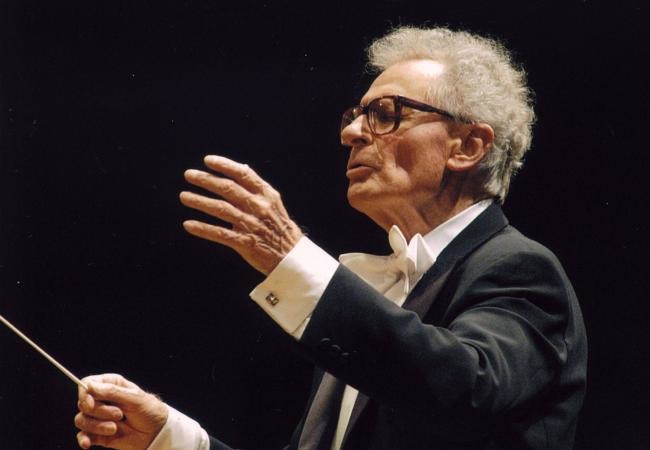 Stanislaw Skrowaczewski, or “Stan the Man” as we in Minnesota affectionately call him, has the distinction of being the oldest major conductor working today. He is also a Pulitzer Prize nominee for his highly regarded compositions. Recently the music communities of Japan and Minnesota expressed their deepest gratitude and appreciation to the beloved maestro in a celebration of his 90th birthday. Our Governor Dayton declared the day—”Maestro Skrowaczewski Day!” Skrovy, (another diminutive), was music director of the Minnesota Orchestra from 1960 to 1979 and he has appeared virtually every season since in his role as the conductor laureate.

Says Frederick Harris, Jr., author of the Skrowaczewsky biography, Seeking the Infinite, “At age 90, Maestro Skrowaczewski is the only such conductor-composer of his generation still active internationally in both fields. He is a unique musical treasure who has contributed internationally to classical music for nearly 70 years.” Imagine — by the end of the 2009-10 season, at last count, he conducted 4,441 concerts and made over 200 recordings, most of them still in print!

During my thirty-year tenure with the Minnesota Orchestra, I had the pleasure of playing under Maestro Skrowaczewski countless times in diverse programs, but his interpretations of the Bruckner Symphonies were legend. Always conducting from memory, he had an uncanny conception and breadth of interpretation.

Bruckner Symphony No 9 with the Minnesota Orchestra

Of course there are many stories that one can relate about Skrowaczewski. A favorite of mine took place in 1979 when there was a near disaster at the nuclear power plant at Three-Mile Island in Pennsylvania. The orchestra had flown to the east coast and was proceeding by bus to various cities in the region. When the results of the accident were still unknown and everyone was glued to their television sets, the orchestra had an emergency meeting to determine what to do. The musicians were scheduled to perform nearby. A vote was taken to not only bypass the city, but the busses were to take the “long cut”—a route well away from the perimeter of the city. It was Skrowaczewski’s habit to drive in a car with the orchestra’s associate principal librarian, Eric Sjostrom. Skrovy loved to follow the route. (This was well before G.P.S) Skrovy got into the car and said, “Ereec. You have map? How you go?” Eric pointed out the route. Skrovy was disconcerted. “Why you not to go thees way?” Eric described the crisis and indicated that he would be following the route the buses would be taking, to stay a certain distance away from Three-Mile Island. “Oh eese okay,” Skrowaczewski responded, “We go fast!” 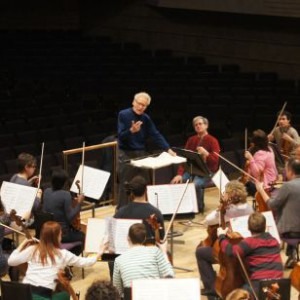 Skrowaczewski was exacting in rehearsal. He would repeat and repeat passages until they were to his liking. Someone once dared to ask, “Is there something you’d like played differently Maestro?” “Oh No!” he replied, “Eet needs rehearsal!” He often would proceed almost to the end of a work and then ask us to start again from the beginning. That was popular!

Skrowaczewski would demand and get every ounce of strength from his musicians, “Under him, there’s no limit to how strong the brass can play in these massive climaxes,” said trumpet player Ron Hasselmann. Skrowaczewski often pleaded for the strings to “Play wit one hair!” A bass player who had heard this request too many times came to rehearsal with a bow literally strung with one hair!

Skrowczewski began his musical training as a pianist. By the age of seven he had composed his first orchestral work, and at the age thirteen he made his conducting debut from the keyboard performing Beethoven’s Piano Concerto No. 3. But World War II erupted and caused irrevocable damage. The Germans bombed his city of Lwow in 1941. The nerves and bones in his hands were permanently injured when a wall of a house fell on him. Despite surgery he would never be able to perform as a pianist.

Skrowaczewski’s education continued underground where he met with small groups of students and professors while hiding during the war. Afterwards he traveled to Paris to study with the world-renowned teacher Nadia Boulanger and in 1948 he conducted the Paris premiere of Shostakovich Symphony No. 5.

After serving as the music director of both the Krakow Philharmonic and the Warsaw National Orchestra, he made his U.S. debut with the Cleveland Orchestra in 1958. Soon after he was appointed to the position of Music Director of the Minneapolis Symphony (renamed Minnesota Orchestra.)

Skrowaczewski championed fellow Polish composers Penderecki and Lutoslawski, and like them, Skrowaczewski’s music was ahead of his time. The birthday concert program on February 23rd, 2014 was telling, including no less than four of his own works and six world premiere’s by composers: Karel Husa, Paul Schoenfield, Steven Stucky, John Harbison, Gunther Schuller, and Skrowaczewski himself.

It was he who lobbied hard for Orchestra Hall to be built, the home of the Minnesota Orchestra. The first program in the hall in 1974 began with Skrowaczewski’s arrangement of Bach’s Toccata and Fugue. Fittingly, a few weeks ago when the renovated Orchestra Hall re-opened, Maestro Skrowaczewski was invited to conduct and once again he opened the performance with that work.

Skrowaczewski had another life-long passion— mountain climbing. His thin, wiry physique showed years of dedication to the sport. When he was young, Skrowaczewski’s father would take him on steep mountain trails, hiking sometimes for six or seven hours at a time. Mountain climbing and skiing were the needed respite from worldly cares.

Skrowaczewski is optimistic about the future of art, “Even the regimes of Hitler and Stalin could not kill it. Only if our soul is dead, will art be dead… To me, art is a dialogue with the unknown. This dialogue encompasses all fundamental human concerns – such as the meaning of life and death, love and cruelty, sacrifice and redemption – in the constant hope of knowing that which cannot be known.”