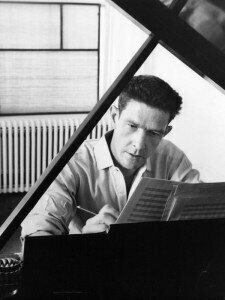 We associate John Cage with a number of different sound events – the percussion group that he took on tour around the West Coast in the late 1930s, random radio sounds from his work for 12 radios (Imaginary Landscape No. 4) in his aleatoric period, the pieces for prepared piano, and, of course, no sound at all for his ground-breaking conceptual piece 4’ 33”.

His 1948 work, In a Landscape, was written for the dancer and choreographer Louise Lippold and gives us another sound world. At the time, Cage was studying Indian philosophy and aesthetics and lecturing and performing at Black Mountain College, Ashville, North Carolina. Beginning around 1946, he took as a student Gita Sarabhai, an Indian musician. In exchange for his lessons in Western music, she tutored her teacher in Indian music and philosophy. This piece should be listened to in terms of the goals that Cage set for music, based on Sarabhai’s teachings: “to sober and quiet the mind, thus rendering it susceptible to divine influences.”

The piece is constructed in a rhythmic structure of 15 x 15 measures (5-7-3) and was intended to be used as the basis of a choreographed dance piece by the work’s dedicatee, Louise Lippold.

Cage: In a Landscape (Stephen Drury, piano)
The music seems to flow around you and its lyricism completes with the dynamics for its lyricism.
When we look at the work again in a dance context, we realize that the visual gives us a different point of access to the music. We try and match the dancer’s movements to the sounds we hear. 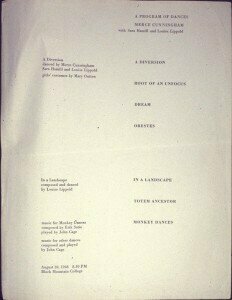 Program from the first performance, with Louise Lippold dancing.

Instead of the music flowing over us, we now see it, as the title indicates, In a Landscape. The dancer reacts to the music – upwardly flowing musical lines draw her upward and when it’s no longer possible to ascend, she begins in a different mode.

The work was also written to be played on the harp and because of the different method of sound production, plucking the string versus a soft hammer hitting the string, we again hear the piece differently.

It’s become more percussive. The flow in the piano work was assisted by the use of the pedal, but on the harp, the initial pluck, although pedal sustained, has a different effect.

Another version of this piece is performed by two dancers to a robot orchestra that seems to defeat the essentially lyrical quality of the original work through the use of too many off-pitch and percussive sounds.

We prefer the purity of the original piano version!