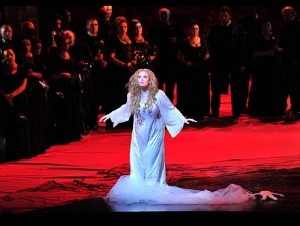 Consider; opera based on text of XIX century with music of the same period produced and sang in Israel, a country reeling in inner
battles; the ultra religious (haredim) against the institutions, the mitnahalim (settlers) against everybody, the right and far right, against the left and the hushed left.

Then the recent scandals, a former president (Katsav) just released from prison after five years served as a serial rapist, a former prime minister (Olmert) presently serving two and a half years for money laundering, a serving interior minister (Arie Darai) convicted for fraud who served five years.

And in spite of this an amazing amount of culture, theaters, operas, concerts, dance, restaurants and the city that does not stop… for the young. 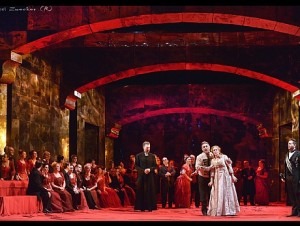 And now the opera.

Lucia di Lammermoor is based on a story by W. Scott, the famous writer who lived in Scotland in the 19th century.

The opera is feasting at least twenty years in its new location. It is part of a cultural complex including the Kameri theater and the Tel- Aviv museum with its new stunning wing; a Middle East Lincoln center.

Over the years, most favorite operas were produced on this stage not afraid to take on such titanic works as Falstaff, Macbeth, Il Trovatore, the Voyage to Rheims as well as Tosca, Madame Butterfly, Turandot and of course the trilogy of Mozart and Da Ponte. 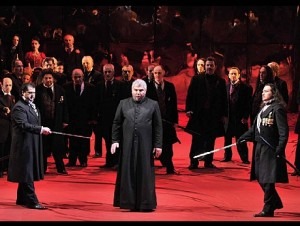 There is also the Meitar studio which like the Academia della Scala is the hothouse of future stars.

Michael Eisenstadt is overseeing this rich source of Israeli talents with the devotion of a father hen and takes the opera to the remote corners of this beleaguered country.

This has come with a huge cost in a country where everything costs already the double of what it should.

So, Hanna Munitz has raised during her tenure over one hundred million NIS which would equal the budget of some countries the size of Israel. 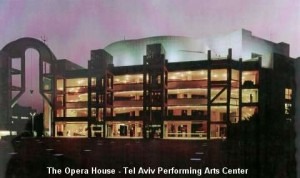 Mammouth events such as operas at the foot of Mezada fortress in the Judean desert have made the Israeli opera famous all over the world.

The modern opera house, a no nonsense classic hall with a large parterre and three balconies is housing 1500 seats it is almost always full and at some locations the acoustic is problematic.

The story tonight; Lord Ashton, a victorious usurper of Ravenswood and his lord Edgardo is failing to keep his domain in front of the advancing armies of Mary Stuart.

The only way to preserve his domain is to wed his sister Lucia to Sir Arthur, chief of the conquering armies.

But Lucia is secretly in love with Edgardo and her brother Enrico laird of Lammermoor is desperately trying to stop their marriage.

Misled by a false marriage document found by Edgardo the latter decides to break his engagement to Lucia and flees to France to fight from abroad the usurper conquerers.

Lucia is bending to the will of her brother and will marry Arturo.

Gone with her husband at the beginning of a fateful marriage trip she returns shortly with her nightgown soaked in blood.

Follows the mad scene where Lucia is using all the available musical resources of her voice and of the score and finally collapses dead on the stage.

Donizetti was the Tsar of the Bel Canto, in the 19th century propelling the Italian music from Rossini to Verdi with much gusto and great public approval.

Rich of sixty or so operas, he inherited to the texture of Lucia di Lammermoor, it’s melodious, rich and captivating lines.

Main arias; mostly for baritones, tenor and of course Lucia who seems to sing non-stop for three hours and of course the famous sextet.

The choir has wonderful if somber passages as at the end of the first act and some of its young members will maybe soon be singing solo on the stage.

The staging retaken from a 2012 production is rigorous, dark, economic reflects the gory story and adds much to the spirit of the opera and takes little from the action and the singing.

Amazing Hila Baggio (Lucia) who stirred emotions and enthusiasm and got a well deserved ovation. Hila is destined for major opera houses.

The choir is splendid an ensemble well rehearsed by Eithan Schmeisser who will take the baton for the last few representations.

Finally there is the orchestra of Rishon Letzion well led by Daniele Callegari, a conductor with much platina.

So yes buy the expensive tickets to this remarkable performance you will leave the opera house culturally enriched and financially poorer.