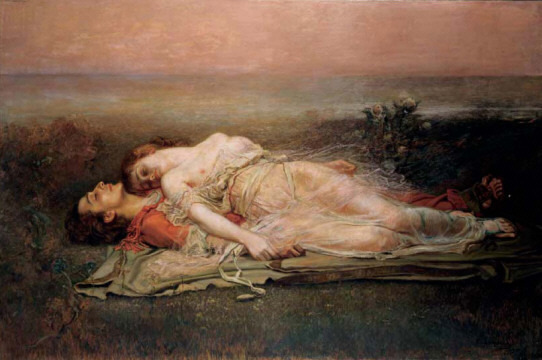 Wagner’s Tristan und Isolde tells the story of good intentions gone wrong. Tristan is sent to Ireland to fetch the beautiful Isolde, the intended bride of King Mark of Cornwall. Tristan killed Isolde’s fiancé, Morold, and Isolde is in despair about her future, travelling with a murderer to a man she doesn’t wish to marry. She tries to kill herself and Tristan with a poison but her maid substitutes a love potion instead and the two fall into love immediately (this is an opera, you know!). Isolde is delivered to Mark and continues to see Tristan whenever possible. They are eventually betrayed by Tristan’s best friend and in their fight, Tristan is severely wounded. In the end, as he lays dying in a castle in Brittany, Isolde arrives just as he dies with her name on his lips and she collapses. Also arriving is a ship with King Mark, Tristan’s friend, and Isolde’s maid who has told Mark the reason behind Isolde and Tristan’s illicit love: the potion she substituted. Mark declares that rather than coming to take Isolde away, he was coming to unite her with Tristan. Isolde sings a final aria describing her vision of Tristan alive again (the “Liebestod” or “Love Death”) and dies over the body of Tristan.

When Wagner tried to interest opera impresarios in his new work, he was turned down by house after house because of his daring use of chromaticism and harmonic suspension. It was just too modern. Finally, Wagner took the two principal parts of the opera, the Prelude to Act I and the “Liebestod” ending, put them together, and toured them as symphonic works to garner interest in the opera. King Ludwig II of Bavaria stepped forward and the opera was given its première on 10 June 1865 at the Munich Opera with Hans von Bülow conducting. 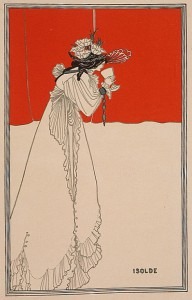 Isolde by Aubrey Beardsley, 1895 illustration for The Studio magazine of Isolde drinking the love potion

The music is some of the most dissonant and difficult that Wagner ever wrote and it has been said that from the first notes of the “Prelude,” the audience would have felt the inherent tragedy that was to be laid out before them. It is also said that from the first notes of the “Prelude,” most of modern music found its starting point. Musical tension is created all over the opera by the use of prolonged unfinished cadences – Wagner builds to a point of tension and then delays the resolution, drawing the listener even deeper into desire. It is only with the final aria, the “Liebestod” that the tensions that have been building up over the entire opera resolve – and in that resolution, we have Isolde’s death.

When done right, the “Prelude,” with its pianissimo opening, moving to the exposed “Tristan chord” can lift you off your seat and move you into an uneasy world of love and emotion. Don’t listen to this in a bright room – turn out the lights, close your eyes and let Wagner transport you to a world of love and tragedy.

Wagner: Tristan und Isolde: Act I Prelude (Royal Swedish Opera Orchestra , Leif Segerstam, cond.)
Wagner: Tristan und Isolde: Act II: Mild un leise wie er lächelt, “Liebestod” (Royal Swedish Opera Orchestra , Leif Segerstam, cond.)
As you listen to the “Liebestod,” concentrate on the end where, as she finishes singing, there is a marvelous resolution in all the tension she had built around her. The music goes to the minor at 05:13 and then at 05:24, we’re in the clear and sailing above all the world’s problems. The orchestra has the final word, returning us to a world that is calm, if empty of love.