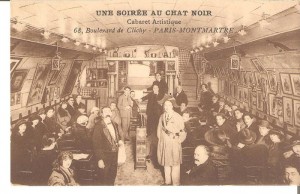 If you were looking for dinner and a song during the Second Empire in France—basically during the reign of Napoleon III from 1852-1870—the Parisian café-concert was the place to be. Providing a combination of food and entertainment that included strolling performers singing drinking songs, it became the people’s opera. The growing popularity of these open-air concerts led to the construction of makeshift stages that were soon replaced by permanent stone-pavilions with room for a piano or small orchestra. 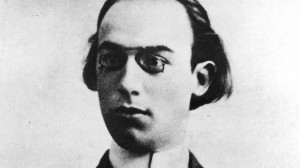 Almost predictably, the subject matters fell into standard routings, ranging from drunkards running and screaming around the stage to the female eccentric, usually rather skimpily dressed who would recited comic texts to music. Edgar Degas famously painted his “Dog Song” in the environment of the café-concert. Eventually the café-concerts would add short plays and dance numbers. The musical name commonly associated with this type of environment was Erik Satie, who spent well over a decade of his life playing the piano and composing songs. 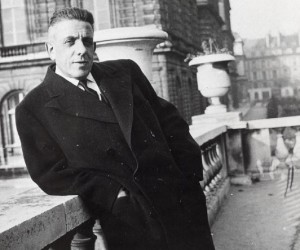 Around the turn of the century the café-concerts gradually expanded to include dance numbers, acrobats and other attractions from circus, sports arena and fairgrounds, including boxing kangaroo’s and human calculators. The distinguishing feature of the Parisian music-hall entertainment was the grand spectacle, which included elephants, polar bears and other exotic creatures, including bathing beauties plunging into swimming pools. 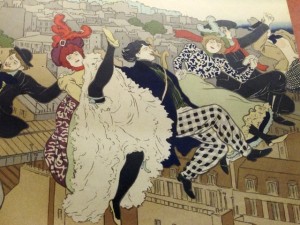 The ultra-conservative Le gaulois writes, “Observe a program from one end to the other—in which a drunkard’s hiccups give way to a young girl’s obscenities; where the triumph of French wit and gaiety consists in disguising as a soldier the most grotesque clown so that he may disgorge with his slobbering idiocy, the uniform for which our patriotic orators do their utmost, yet in vain, to demand respect.” Erik Satie ingeniously transferred this circus atmosphere of the music hall into the multimedia spectacle and ballet Parade. Commissioned and performed by the Ballet Russes and Serge Diaghilev, Jean Cocteau imagined the scenario, Massine provided the choreography, Apollinaire wrote the program notes and Picasso designed and painted the costumes and the set! 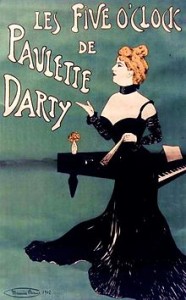 For centuries, the word cabaret had designated a simple tavern or corner bistro. By adding the word “artistique” in the 1880’s it became part literary café, artist’s hangout and popular entertainment venue. It providing literary hopefuls and confirmed bohemian crooners a congenial meeting place. The “Hydropathes,” a group of writers and musicians who suffered from the ingestion of water recited poems and sang verse on whatever stages they could find. As the size of the performing venues grew, meeting frequently became disorderly and mediocre poets and singers found themselves booed off the stage. Although veterans of the café concert still offered their vintage chansons, a more modern sensibility began to emerge that attempted to appeal to loftier intellectual pretensions. Francis Poulenc probably sensed the spirit of the cabaret and the age of Toulouse-Lautrec more innately than any other composer. 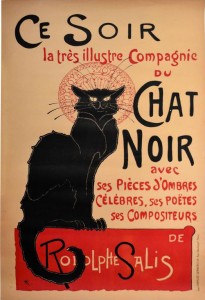 In 1881, a new venue located at the foot of Montmartre opened its doors. The room was decorated in medieval style, with stained-glass windows, wall-panels made of armoire doors, pewter mugs, massive chestnut furniture, and wrought-iron lamps hanging from the ceiling. Adolphe Willette designed the shop-sign, a black cat with arched back, perched on a crescent moon. Above the wall panels, paintings and prints by the artists who frequented the establishment were displayed. This decoration had the effect of transforming a simple tavern into a theatre set, and customers entering the establishment became part of a staged event. 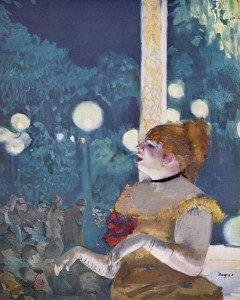 This inherent theatricality was crucial to the success of the “Chat Noir.” The fortunes of this most famous cabaret depended on selling Montmartre, a seedy if picturesque quarter, as a locus of romantic appeal to the wider Parisian market at large. This was achieved with the publication of a weekly magazine and various sales pitches referring to “Montmartre as the brain of Paris and the breast that nourishes a generation of poets thirsting for the beautiful.” Inspired by the Parisian burlesque chanteuse Paulette Darty, Satie wrote the characteristic waltz song Je te veux (I Want You). Cast in a simple refrain and verse structure, Satie had to water down the text several times in order to make it suitable for public consumption!