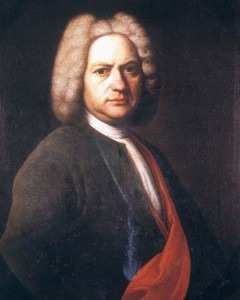 Johann Sebastian Bach simply had no time for incompetence! In one famous anecdote he pulled off his wig and threw it at another musician with the words, “You should have been a cobbler!” And we all know the anecdote where Bach pulled a knife on a bassoonist, supposedly in self-defense. The bassoonist seemed to have become upset because Bach had compared his playing with the sound of a Billy goat! And when the famed organ builder Silbermann introduced his tuning system for the organ, Bach called it “one third barbaric.” Mind you, to show up Silbermann he immediately launched into an improvisation in A-flat major, the absolutely worst key in that particular tuning system. And by the way, flattery did not get you anywhere with Bach either. When an admirer would not stop singing the praises of his mastery on the organ, Bach replied, “There is nothing remarkable about it. All one has to do is hit the right keys at the right time and the instrument plays itself.”

Things got hardly better when Bach was actually dealing with his employers. After a number of years as organist in Arnstadt, tension started to gradually build, as Johann Sebastian did not like the low standards of singers in the choir. Meanwhile, his employers were unhappy that he took a couple of months of unauthorized leave to visit the composer Dietrich Buxtehude in Lübeck. He also got reprimanded for playing the organ too long in a service, so at the very next opportunity he deliberately stopped after a couple of seconds. But things got even worse during his stay in Weimar. Bach was jailed for almost one month before being sacked. The court secretary reports “On 6 November 1717, the quondam concertmaster and organist Bach was confined to the County Judge’s place of detention for too stubbornly forcing the issue of his dismissal and finally on December 2 was freed from arrest with a notice of his unfavorable discharge.” Bach had a reputation as being an exceptional keyboard virtuoso and a supreme musical craftsman; but he also had a long record of insubordination.

Given his chequered employment record, it is not surprising that when the job of director of music at St. Thomas in Leipzig became available, Bach almost did not get it. The search committee tried for Georg Philipp Telemann and Christoph Graupner, but when both man declined, councilman Abraham Christoph Plaz wrote, “Since we cannot get the best, then we will have to settle for average.” And that average musician was none other than Johann Sebastian Bach! Aware of his previous escapades, three days ahead of the vote, Bach had to promise not to leave Leipzig without permission by the city authorities and to maintain “good order in the churches” by not writing compositions that “were too long.” Yet trouble was not far away. Barely a year into his tenure in Leipzig, he lodged an official complaint that the students “had no talent for music at all.” And he demanded a say in selecting which students were accepted at the school. In response, the church reduced his salary, prompting Bach to start looking around for new jobs.

Johann Sebastian Bach: Singet dem Herr ein neues Lied, BWV 190
Bach might have been difficult to work with, but it was difficult to criticize his productivity. Within the first two years in office he composed 100 church cantatas, about one new work every single week! And in 1724, for his first New Year’s celebration on the job, he composed the jubilant cantata Singet dem Herr ein neues Lied! (Sing a joyful song onto the Lord) BWV 190. First performed on 1 January 1724, the gospel reading focuses on the circumcision and naming of Jesus. As such, every line of the duet begins with the word “Jesus,” with Bach calling attention to the fact that the true believer hopes to end his life, just as he begins and ends each year, with the name “Jesus” on his lips. The acceptance of the cycle of life and death is, after all, the most natural and inevitable of human responses to existence. Bach adapted the music for the celebration of the bicentennial of the Augsburg Confession in 1730, and during this process of revision the orchestrations for the first two movements were lost. Only the voice lines and the two violin parts have survived, and Diethard Hellmann, Ton Koopman and John Eliot Gardiner have proposed slightly different reconstructions. What can we learn from J.S. Bach for 2016? Work hard, insist on excellence, and don’t cut corner! And it might be worth remembering that a little humility won’t hurt either!